Do we need any more reasons? 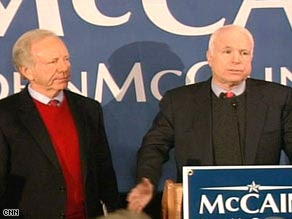 The debate over the future of Joe Lieberman's leadership of the Homeland Security Committee is going on way longer than I expected. This should have been resolved last week. Now Harry Reid is making conciliatory noises as if Joe's actions over the last several years don't mean much.

I know this is an emotional issue to many Democrats. Lieberman's outright disdain and public bashing of our President-elect has been shameful and scandalous. If Joe Lieberman was a Republican and he pulled the same shit against the GOP, he would have been tossed out of the party in about a nanosecond. Our leadership gives off a smell of weakness and indecision when it takes them so long to issue punitive measures against Lieberman.

But let's put all that aside for a moment and take a look at a cold hard non-partisan FACT about Lieberman.

The fact is, Joe Lieberman has done NOTHING in two years as Homeland Security chair in terms of oversight. The very reason we have this committee is to investigate ways to make our nation safer and provide oversight of the administration's policies. For two years, there's been no oversight, no hearings, no subpoenas, nothing.

This abandonment of duty is an example of the worst kind of malfeasance known in government. The absolute lack of doing anything to avoid the appearance of doing anything wrong! Joe has utterly and thoroughly abdicated his responsibilities to the American people by transforming himself into a puppet for the GOP and a cheerleader for George W. Bush's failed policies. His endless appearances on the campaign trail with John McCain over the last 11 months are a prime example of the kind of leadership that Joe Lieberman provides for our nation. Lieberman's mealy-mouthed accusation of Democratic "partisanship" is simply a thin vaporous smokescreen he's using to try to conceal his own vicious and destructive GOP partisan agenda.

Meanwhile, nothing of importance is getting done by Lieberman as he scrambles to maintain his hold on power. He can potentially cause the Democrats real damage with the subpoena power and investigative authority he'll finally use if he's allowed to continue as chairman. Suddenly, he'll find plenty of reasons to use his power to create a logjam in the Senate against any useful Democratically-sponsored legislation.

Joes problem is that the Repiggies don't trust him either or he would of bolted long ago. If harry had enough balls he would remove his ass and watch him still caucus as a Dem. Call his bluff harry!!!!

AntiLiebermaniaphobicosis (n.): A sick obsession with a sickening political figure.

Please help me out here.

I can’t think of anything good to say about Joe Lieberman. But, by now, perhaps everything bad to say about Joe Lieberman has been said – in triplicate. I get how awful and traitorous and treacherous he is. Complete agreement here. But perhaps, enough for now? Like, let’s keep a watch on him, maybe an electronic ankle bracelet, but isn’t it time in that “denial, grief, anger, whatever” process to move on?

I mean, I Googled the guy, he was only 2.4 million hits behind “High School Musical 3”. THAT’s scary!

If I were some sort of fly-by-nighttime-pseudo-psychologist talk show host, I’d have to ask: “So what are you all GETTING from our endless debates about this man? This “Lieber”-man? Is this, in fact, avoidance behavior? Think of all the other worthy topics you are ignoring, with this, this, this . . . AntiLiebermaniaphobicosis!”

SO: Whataya think of those Giants this year, huh?

We should wonder what Lieberman HAS been doing with his DHS committee. Remember, he has oversight of the FBI.
The founder of the FBI, J. Edgar Hoover, was believed to have extensive dossiers on all possible political opponents ready to use as leverage. Blackmail, basically. This is why he survived so long on the job despite being widely hated.
If you are paranoid enough (you should be), it isn't hard to imagine Joe having cooked up something like this. Could be why no one will cross him and also why he is so desperate to hang on to that committee chair. Interesting that the FBI director also seems likely to keep his job too.
oldswede

For what it's worth, it's simply politics in action.

There's a (remote) chance the Dem's will get to 60 (w/Lieberman & Sanders). Reid -- despite your vice-principal picture, Bob -- is (as they say) "keeping the options open."

I call this the "same ol' political spaghetti-spine Democratic politician who's afraid to take a chance" stance.

Joe-(No-Ho)Mo has to get his ass kicked; unfortunately, we the CT voters have to wait FOUR MORE YEARS. Maybe we should start chanting this on his (rare) state appearances.

Like I said before, ANY Democrat would be a better senator than Lieberman. Look at the Dems we have right here in this state: Larson, DeLauro, Courtney, Murphy, Lamont, Jepsen, Malloy, DeStefano, etc. etc. etc. any of 'em would be WAY fucking better than Joe "DINO" Lieberman.

I can name fifty more local Democrats that would STILL be better than Lieberman.

We don't WANT Joe, we don't NEED Joe, and we'd all be better off WITHOUT Joe!

We’ve all displayed the proper outrage, Harry Reid came up with a comprimize, Mr Bobblehead balked properly and tried to cry on the Republicans shoulder, The Republicanss said ‘come on in but don’t expect anyone to talk to you’, Dodd stood up for the guy who’s got to carry half the load in getting Connecticuts share of what is surely to be a dwindling defense dollar, and Obama played the father welcoming home the prodigal son.

Now all that remains is the primary problem for Lieberman…That he truly hurt the people that supported him and embarrassed the party that promoted his career from a State Senator in Stamford, to US Senator (Including Bill Clinton at Yale). We are assuredly angry.

Senator Lieberman needs to swallow the ego he has develloped from his years in Washington, and offer the party and those that stood by him some personal form of pennance. Let him publically recognize that he has hurt his friends and supporters, and offer to switch jobs rather than display the petulance that will only harden the resentments he has spawned. Let it be his choice, rather than a fiat from party leadership.

The ball is in his court…

Let's start an e-mail campaign from CT to Reid:

It's more valuable from CT Dems. Bob, YOU have the forum, you have the connections....The ball's in your court. Let's go VIRAL on the Senate!