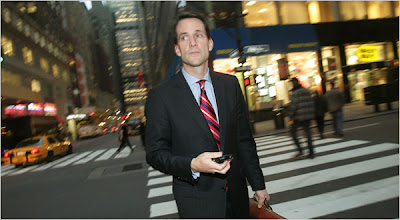 Here's a great article in the Times (h/t to Oldswede) that profiles Jim Himes and his recent victory. It's a good introduction to Jim for those who don't know a lot about him, and there were even a few things I hadn't known.

Mr. Carlson warned that Mr. Himes could turn out to surprise people, not only in his district but in Washington. There was that time, he said, a winter or two ago, when Mr. Himes fell through thin ice while skating. But he had two screwdrivers in his pocket to pull himself up — just in case.

“In the classic Jim way, he was completely prepared,” Mr. Carlson said. “He’s confident, resourceful, but pushing the edge. He loves to push the edge.”

OK, I'll admit that's a little bit weird. I'm not questioning Jim's judgment, but if I thought the ice would be thin enough that I brought two screwdrivers with me in case I had to claw my way out of the cold water, I'd probably wait a few days for the weather to turn colder. He must have REALLY wanted to skate that day!

When Jim goes to D.C. as a freshman Congressman during a financial crisis, he'll certainly be skating on thin ice for a while. But fortunately for us, Jim is armed with the right tools to help Congress claw its way out of the economic mess we're in.
Posted by CT Bob at 11/11/2008 05:40:00 AM

Hmmm, a wall street insider. Yep just what we need. If Mr goldman sachs really wants to help the poor he would fight to take over the homes of the rich and turn them into free housing for the poor. Force the so called middle class suburbs to build free housing for the poor. But no, the dems run the same capitalists who use capitalist techniques to enrich themselves while making it look like they care about the poor. Mr. himes can lead by example by giving away his house in caucasianville to a poor family and moving into bridgeport. what better way to show he ain't a liar, and really cares? I won't hold my breath. Looks like the dems will aid us in their destruction the same way the republicans did. Suck up to capialists and you seal your doom. The workers wait while you destroy yourselves, then we take over. One party destroyed one to go.

Hey kid,
Try practicing what you're preaching and get your own blog. Now you're just a blood-sucker on Bob's work, a parasite on the honest working man.
oldswede

Oh nooooes! He is a liberal nutter who thinks he can skate on the other side of the ice if he brings magic screwdrivers! What have we done? lol jk

Anon... Enabling the growth of "capitalism" for those that own most of it as well as the poor and middle class can go hand in hand. Done responsibly, they are not mutually exclusive goals.

Capitalism, like any other idea or "ism", can be good or bad. All of them depend on the the leaders to make choices that are good for everyone.

oh forget that. HERE IS THE BIG NEWS, Himes made the top 10 congressional hotties list!

Jim Himes, the preppie former i-banker, is a perfect fit for his Greenwich, CT district. In defeating that odious wishy-washy dishrag Chris Shays, Himes vanquished the last standing House Republican in New England. Usually, we disapprove of all things Connecticut, but we’ll make an exception for this STONE FOX.