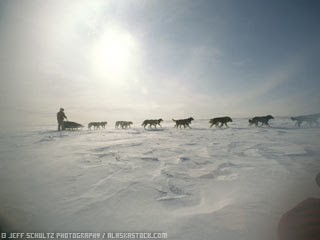 With about a thousandth of the speed of the Iditarod Sled Race, the counting of the ballots goes on in Alaska. And Mark Begich has taken a growing lead over convicted felon Sen. Ted Stevens, which stands at about 800 votes as of early today.

The ballots being counted are mostly early and absentee ballots, which are expected to lean Democratic. As more of them get counted, Begich's lead will likely increase.

I guess in Alaska, Maverick really means outlaw or criminal.
More Jim Himes today. See Firedoglake for his posting. He stayed for online discussion too.
Here: http://firedoglake.com/2008/11/13/thank-you-blue-america/
oldswede
[Hey, the word verification is "sweed". Do I win something?]

Yeah, I saw the live blog today, it ended just before I got home. Jim answered a bunch of questions and seems really ready for the challenges ahead. I thought he sounded great.

I don't know how the word verification thing picks it's words, but I've had some weirdly appropriate ones myself. I wonder if it generates the word based upon the content of the message or something like that?

Hope this puts an end to the plans for Palin to go to DC as Stevens' replacement.

Probably, although Palin will probably haunt the political landscape for a while, like the spirit of someone recently deceased but doesn't know it. Eventually she'll fade away.