Let's Put Obama on the Couch 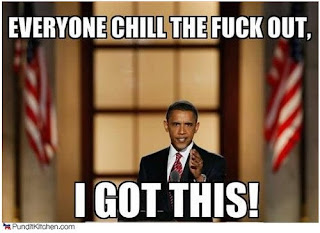 When I first heard that Obama had met with Hillary about the SoS job, I figured it was a leak from her side to boost her negotiating status in the Senate on health care. She clearly had not counted on Ted Kennedy pushing back when she assumed the health care mantel -- don't count him out yet.

Obamaland cannot control leaks anymore. FBI background checkers talk to neighbors, co-workers and friends, and they have no reason to keep quiet because that's how Obamaland works.

At this point, who am I to argue with Obama? We have wondered what was up with the Obama camp earlier in the campaign, and he pulled it off in grand style. But, Bob Woodward thinks "they're smoking something" (Chris Matthews Show 11/23).

And Harvard Business Review columnist Michael Watkins nails the four points that have been in my mind: influence, incentives, baggage part 1 and baggage part 2.

Yet, today, the NY Times tells us:

By this past Thursday, when Mr. Obama reassured Mrs. Clinton that she would have direct access to him and could select her own staff as secretary of state, the wooing was complete.

I doubt this type of inside story is coming out of Chicago.

Is this a brilliant move or Obamaland's first catastrophic move?

Glad to have you back posting here, Kirby! You were sorely missed!

I added a new feature to the blogger template that will show the author's name on the top of each post, so our readers can easily differentiate between us...although, I'm sure the better grammar and spelling of your posts would have been sufficient anyway!

I think Obama's being very shrewd in his decisions. I think Joe Lieberman is now Obama's "bitch," and I think by giving Clinton (who I detest) the SoS position, he's getting her out of his way, making her agree with his policy, and effectively (at least trying to) pull the reigns in on Bill. One show mentioned what a thorn in the side Carter was during the Clinton administration, on foreign policy. Obama seems to be an astute student of history. I'm going to give him the benefit of the doubt, until this whole thing goes straight down the, you-know-what.

After eight years of horrific leadership, I'm willing to give Obama plenty of leeway before I start complaining. The leaks are pretty much acceptable, especially if you consider that they might be a way for Obama's people to get a preview of possible reaction to a certain choice. Sort of like floating a trial balloon.

Plus, it's really difficult to keep something like Hillary visiting Barack completely under wraps. I think it's understandable that these "leaks" will get out. If something really critical gets leaked, then he might have a problem. But this doesn't seem to be that big a deal.

One of the Obama team commented that there is no longer any way to prevent leaks because the FBI is going around interviewing friends and neighbors of potential appointments. These interviewees have not been indoctrinated into the Obama way, so they will talk freely. With the press in hot pursuit, of course.
oldswede