Can they do NOTHING right? 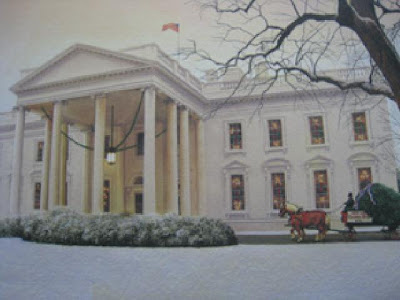 Sometimes I really think they're just fucking with our heads!

WHITE HOUSE (CNN) - Whoops! A picture of a Christmas tree is not the first thing you would expect to see on an invitation to an event celebrating Hanukkah, but that is exactly what recipients of invitations to this year's White House Hanukkah reception initially got in the mail.

The invitation sent to American Jewish leaders on behalf of the President and First Lady, requesting "the pleasure of your company at a Hanukkah reception," bore an image of a Clydesdale horse drawn cart, carrying the White House Christmas tree, with a Christmas wreath-adorned White House in the background.

In related news, another card with a team of Budweiser Clydesdales pulling a sled with a Christmas tree and an ice-cold keg of Bud upon it was sent to the headquarters of Alcoholics Anonymous.

Mrs. Bush's press secretary, Sally McDonough, attributed the snafu to a "staff mistake" in not printing separate cards for the different White House holiday events, as has been the custom in years past. "Mrs. Bush is apologetic, It is just something that fell through the cracks," she said, referring to the role of the First Lady's office in sending out the invitations.

The card as originally intended featured a menorah given to the White House during Harry Truman's presidency. That mailing was to have gone out today, according to Mrs. McDonough.

Sadly, the cards featuring the menorah was sent to over 1200 Islamic Mosques in America, along with the message "Le chaim, bitches!" inscribed upon them in gold lettering.

Those Righties are always trying to kill Hanukkah and the Hanukkah message.


I wonder if O'Reilly will make a rant out of this?