I spent a few hours at my local precinct handing out "Vote No on 1" handcards yesterday morning. Generally, most people accepted the cards when I smiled as they approached and wished them a big "Good morning!" as I thrust a card towards them. Some scowled and said "No thank you" as they walked past, reminding me of the way I usually behave towards people who do what I was doing.

The irony wasn't lost on me.

Quite a few people took the card, and after glancing at it briefly, they asked "What's this?", which allowed me to explain the purpose of the question and why a new Constitutional Convention and the possibility of making every legislative issue into a ballot question would be bad for Connecticut. Many didn't even know the question was on the ballot, and more often than not, told me they'd vote no on the question. It was very fulfilling to be responsible for helping at least some people make up their minds. 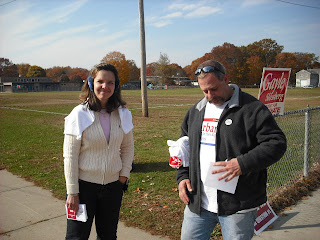 The success of the Vote No effort is proof that a large number of committed volunteers can successfully defeat a well-funded group that appeals to a limited number of special interests.

I'll have more to discuss later on the implications of this vote, and how it contrasts with California's apparent adoption of Proposition 8, which bans marriage equality.
Posted by CT Bob at 11/05/2008 12:33:00 PM

Why will Senator Lieberman never ever leave a post here?