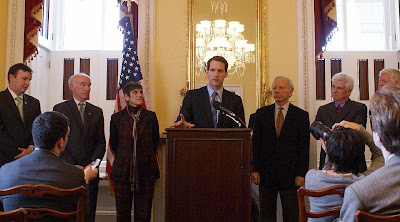 This is a really great picture. It shows the Connecticut Congressional Delegation with a theoretical Republican count of nearly ZERO!

Jim talked about Joe Lieberman briefly during last week's chat over at Fire Dog Lake, and here's what he had to say:

"As far as I know, Senator Lieberman did not endorse Shays over me. I do suspect that was tactical, and not a result of confusion over whom to support. I don't think I will be called upon to opine on Senator Lieberman's future, but I, like you, am really dismayed that he worked so hard for Republicans at THIS moment in history. Last week, the country was presented with radically divergent paths, and I don't think Senator Lieberman backed the right one. There have to be consequences for that. I'll note, though, that the American people expect all of us to get quickly onto the business of stabilizing the economy, withdrawing from Iraq, and restoring the basic competency of government, and will have limited (not zero, but limited) patience for partisan payback."

This was from before the Senate's "Lieberman Capitulation" (I can't think of anything else to call it) and it shows how well he balances the need to look forward while being aware of what just transpired.

"It shows the Connecticut Congressional Delegation with a theoretical Republican count of nearly ZERO!"

But I thought Sen.Lieberman was an uber-Republican, kind of like Chaney on ridilin. Everything I've read the past week has said he's a Republican mole. I'm so confused! (hee hee)

Funny how you immediately assumed I was referring to Lieberman. Just goes to show ya!

You mean you were talking about someone else? Yey! I've finally won you over! What did you think of the Katie Couric interview today? You have to agree that Lieberman did better than Palin.

Lieberman is not a Democrat or a Republican. He's an Egomaniac.
UptowNYChick

Whatever Lieberman is I wouldn't describe him as a happy camper as he posed for this photo!

No, not happy at all. I'd imagine Joe hasn't done much smiling since his favorite candidate selected that snow flake for VP.