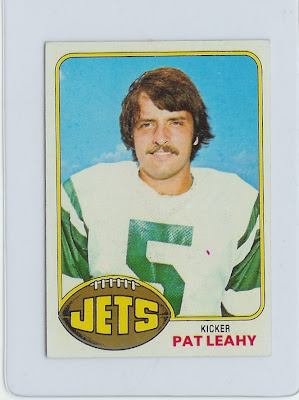 Earlier today, Sen. Pat Leahy (D-VT) became the first senator to go on the record calling for Joe Lieberman to be dismissed as chairman of the Homeland Security Committee.


Bravo to Senator Leahy for acting like a proud Democrat, for standing up for what's right, and for being a hell of a kicker for the NY Jets.

CORRECTION: Apparently Sen. Pat Leahy never played for the New York Jets, and his correct photo is below: 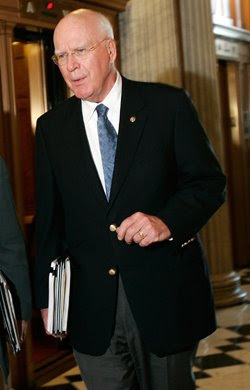 We apologize for any inconvenience this may have caused.

Some resemblance to Y.A. Tittle, though.
oldswede

I understand that being a CT boy, you have to be a Pats fan. So I forgive you. And in any event, we all stand united in agreeing that Lieberman SUCKS. Sweet Jesus I wish you folks could recall that shitweasle.

Anyways, keep up the good work! Much love to you from way out here in CA.

O.G. - Yeah, we wish there was a way to recall him, too. Sadly, the only way to get rid of him is either by impeachment (will never happen), by voting him out (2012 is our next chance), or by stripping him of the HSC Chair and humiliating him so badly he decides to retire.

I think the third option has the best chance.

"Or by stripping him of the HSC Chair and humiliating him so badly he decides to retire." -CT Bob

CT Bob, listen, I'm speaking as a right-of-center Democrat here. Attempting to humiliate a Senator, no matter what your views of him are, is not something that is going to resonate with anyone outside of the base. This really has a chance of backfiring. I hope (and believe) that the members of the Democratic Senate Steering and Outreach Committee see it that way. I guess we'll find out soon.

I'll give Joe credit. He played the Democrats like a fiddle; supporting the GOP candidate for President, insulting the Democratic candidate, speaking of the danger of the Democrats having a Super Majority, and yet the Democrats are seriously considering keeping him on.

Bravo, Sen. Lieberman, bravo. You've done your worst and it looks like you'll survive to do more. Congrats to you and your twisted agenda. I'm so happy for you.

He spoke of the danger of any party having a super majority... and so did Barak Obama in his book, The Audacity of Hope (pages 98 -100) when he discusses how Senator Lieberman, Byrd, McCain and others formed the Gang of 14 to prevent the Republicans from using the "nuclear option" and eliminating the filibuster permanently. It's amazing: I bet you were seething when the Republicans wanted to get rid if the filibuster but now you're all up in arms that Lieberman, who has been consistent on it's importance, says it's vital to the survival country. Read the book, you'll learn something.

Difference is, we're not talking about banning the filibuster.

And the Gang of 14 was one of the most treacherous capitulations in the history of democracy. They gave the Republicans basically a free hand to appoint all the neocon judges they wanted, with no recourse.

"And the Gang of 14 was one of the most treacherous capitulations in the history of democracy."

The judges were going to be appointed no matter what if they went nuclear. At least by forming the Gang of 14 and compromising they were able to eliminate some of the nominees.