They ain't gonna just lie down

Yesterday I pulled into a bank parking lot right behind a highly polished Hummer. On the back window was a bumper sticker. I felt I had to get a picture of it.

So I parked and approached the vehicle. When I got near, the driver walked up. I pasted a good-ol'-boy smile on my face and said, "Do you mind if I take a picture of that bumper sticker? I think it's awesome!"

The guy, a slight and very serious forty-something yuppie-looking fellow, said "sure thing."

I focused the camera and said, "Where can you buy something like that?"

"I bought it from one of the many right-wing organizations I contribute to. It's a goddamn shame what's happened to this country," he replied.

Ohhhhhh-Kay. I thanked him, smiled again, and threw him a double thumbs-up and said, with completely transparent earnestness, "Palin in twenty-twelve! Gotta go and catch a train!" and took off, leaving him wondering if he'd just been made fun of. 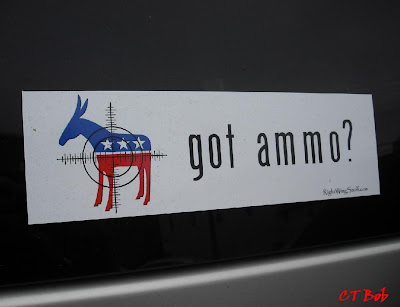 This is a reminder that the extreme Right isn't going to simply go away. The GOP may be a party in disarray, but every indication points to them causing as much trouble for the Democrats as possible.

Already they're launching "Impeach Obama" websites, and right-wing blogs are pouncing on any little thing they can, like at yesterday's presser with Obama's off-hand slap at Nancy Reagan's penchant for astrology, for which he quickly apologized (although, I guess when Republicans explore the supernatural, it somehow ain't Satan's work) or that silly "Office of the President Elect" sign on his podium (really, I can't defend that one; it struck me as very pompous-looking). 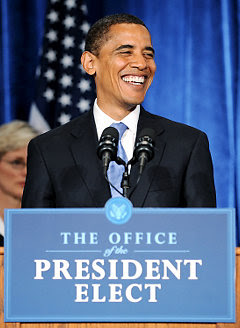 The point is, even though Bush set the bar so low for the Presidency, the weak and ineffective Democratic leadership that allowed him to get away with it is at least partly to blame. It would be a terrible mistake to assume that the Republican minority in Congress will return the "favor". They may be loud, obnoxious, and often over-the-line in their accusations, but they'll never be as complacent as the Democrats have been for the last eight years.

Fueled by the extremist views and contributions from people like the gun-toting Hummer driver above, the Republicans will be much more proactive in their efforts to disempower the new President than the Democrats ever were during Bush's reign.

I didn't notice the sign until you pointed it out. Who's the genius who keeps coming up with these pretentious looking signs?

I agree with you - the Republicans are going to go after Obama tooth and nail. But someone commented in a blog, or a post, that the Republicans have got to stop being "against" everything, and need to find something they are "for" in order to promote the party.

Maybe the nervous hummer guy thought you were secret service.
We need to hammer the hard-right opposition as Un-American for attacking the elected leader of the country and trying to obstruct the work needed to bring it out of its critically wounded condition.
Over and over, we say that we must come together to survive and these bozos are putting wacko ideology first.
Did you read the Boehner piece in Thursday's Washington Post? It's screw the country, party first, all the way. Gotta fight them far-lefties.
Sickening.
oldswede
For the strong-stomached, the WaPo op-ed:
http://www.washingtonpost.com/wp-dyn/content/article/2008/11/06/AR2008110602568.html

The more frightening thing to me is the number of self-righteous wingnuts...who knows how many of these are so crazy as to think their goal "from God" is to "save" the country from this "dangerous force" (Thanks, O'Reilly & Hannity).