Another good thing about Obama winning

No GOP-sponsored pardons for George W. Bush or Dick Cheney!

Remember the Republicans have a history with this sort of thing. Like that time newly ascended President Gerald Ford issued a pardon to recently resigned ex-President Richard M. Nixon, even though Tricky Dick hadn't been arrested, charged, arraigned, nor convicted of any crimes.

True, he was definitely going to be impeached after the three articles of impeachment passed in the House, and then likely convicted in the Senate, but once he quit there wasn't any legal reason for him to worry. Unless he was guilty of something. 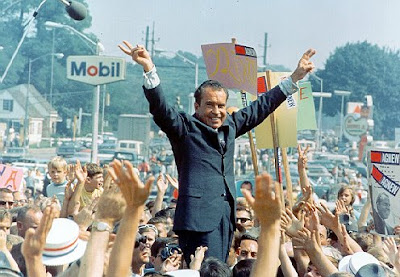 Of course, being pardoned doesn't mean that doesn't mean he wasn't guilty of something. All it means is that justice for his possible crimes was subverted.

I think we'll have a much better chance of seeing justice properly applied some time after January 20th.

No wonder Bush has already said he wants an orderly transition to an Obama administration...he doesn't want to piss off the guy who will have a large say in the decision to pursue W's prosecution.

Sorry but Obama is looking ahead, not behind. No way he would put the country through that kind of partisan division. Reading through the leftist blogs the last 12 to 18 hours shows that ironically after his acceptance speech the hard left is already expressing concern. Though time will tell, I have the feeling that the nutroots will soon realize they were only a means to an end and will turn on him the way some of the more extreme bloggers attack blue dog democrats. We have already seen some of this rancor with his vote on fisa. Americans elected him as a uniter not as someone who will create even more hatred and division. If you on the hard left don't understand this then you really never really listened to what we has been saying for 2 years. To continue to press for witchhunts and ideological purity you guys will be as out in the wilderness as the extreme right wing nutjobs. Ironic isn't it? sort of reminds me of when fascists and communists compare themselves. they are both totalitarians and thus share more in common with each other than anyone else.

Good thing that wasn't a witchhunt. Ass. At least this time there's a president who actually broke some laws that matter!

wow, i came here to read about
retribution for momentum - joe.
and got lectured about being
'hard left' chomsky chewing whatever.

i like the idea of the rule of law,
the international laws about
illegal wars and such.

I tend to agree. The one area in which Obama can make an immediate impact is in accountability for the worst excesses of the Bush administration.

It'll have two effects. First, it'll make people have to answer for things they did, and second, it'll set expectations of how Obama understands the concepts of accountability and limits of executive power.