I hate it when we lose one

No, I'm not talking about the Senate seat in Georgia; that was a foregone conclusion since November.

I'm referring to our new Secretary of Commerce nominee, former New Mexico Gov. Bill Richardson shaving off his beard! Of course, it goes without saying that I'm appalled and aghast. 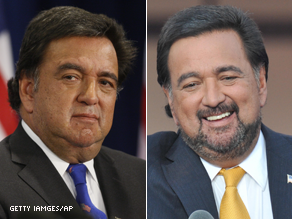 Reactions to Gov. Richardson losing his beard are pouring in! President-elect Barack Obama made this observation about the debearding (via CNN.com):

"I'm going to answer this question about the beard," said Obama, when Richardson was asked where the facial hair went. "I think it was a mistake for him to get rid of it. I thought that whole Western, rugged look was really working for him.

"For some reason, maybe because it was scratchy when he kissed his wife, he was forced to get rid of it.," Obama continued as his nominee for commerce secretary smiled broadly. "But we're deeply disappointed with the loss of the beard."

I'm personally shocked and saddened at this sudden and dismal turn of events. Sporting a jaunty beard should no longer be an impediment to gainful employment, and indeed, we should all work together to restore the beard to its rightful place in modern day fashion. 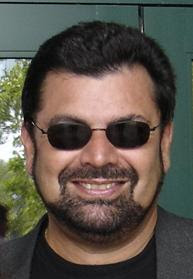 As a long time beard care-taker, I can agree with Obama's feelings on the matter. We need more beards in government, and as long as people like Gov. Richardson shave their beards when they get a new job, the bearded look that was once so popular will find it difficult to make a comeback.

Here's a few examples of Presidents who didn't worry about the impact of facial hair on their careers; in fact, these guys embraced the beard with an almost "ZZ-Top" like fanaticism! 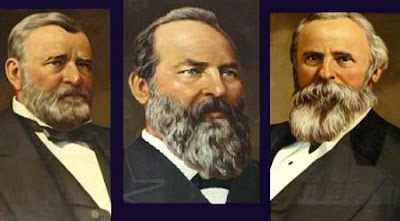 Those guys got some serious 19th-century foliage growing there!

Gov. Richardson made some good points about his beard:

"After the campaign, I grew a beard as a rebellion against those consultants who told me I had to comb my hair, shave, lose weight. I said, You know, I’m gonna do what I want now. That was a good feeling."

That's great, Bill. But why not stick with the beard now that you're going to DC, and help bring the traditional look back to those cabinet meetings? C'mon governor, you KNOW you want to rock that awesome bearded look!

All these beards are Republican. Where are the whigs?
oldswede

No....but the Whigs wore wigs (from a descendent of the first Whig President and a Republican one -- are you listening, ACR?)

>>Republican one -- are you listening, ACR?)

I've got 7 Mayflower, Founders, and signers of the Declaration; and related one way or the other to 6 Presidents.

Anyone who had any ancestors here before 1639 can usually make the same or better claims.

My wife is part Abenaki. Their arrival traces back maybe ten thousand years, but she has no known Mayflower or Arabella branches in her tree, or any of the others.
oldswede

Yet another comment has been deleted because someone was pimping a commercial website under the guise of politically-related talk. They never learn.

I loved Al Gore's beard - with it I think he could have been renominated.

Oaktown Girl just emailed me and asked, since (temporarily) she doesn't have access to Blogger, that I post this important public service announcement on the "beard" thread:

"I think a nicely trimmed goatee on a man is really, really sexy. What I don't like are those long billygoat gruff dealios (gag), or beards alone without a moustache."

There ya go, guys! Shaving tips AND politics, all in one convenient stop!