This article sums up the hypocrisy of the Senate Republicans, by Jed L from DailyKos: 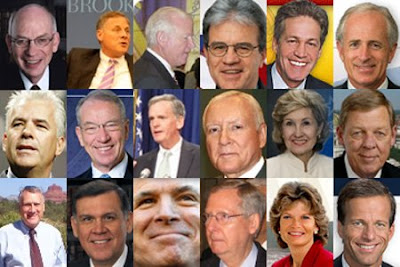 These 18 Republican Senators voted in favor of the $700 billion bank bailout, but against the $14 billion emergency loan package to keep the auto industry from collapsing:

Here they are by name:

Hypocritical, job-killing extremists -- each and every last one of them.

Just to reiterate, these oh-so-fiscally conservative giants, these careful stewards of our nation's wealth, these living monuments to compassionate concern for working families, have decided that a blank check for 3/4 of a trillion dollars to poorly-run banks that give their owners multi-million dollar bonuses is just fine and dandy.

But an amount that equals roughly TWO PERCENT of the bank bailout and probably saves two out of the Big Three automakers is apparently the absolute height of wasteful spending.

It reminds me of the old expression, "In for a penny, in for a pound". I'm not a big fan of the bank bailout, but I feel that if you're in for a pound, you should at least toss an extra penny to a group that actually PRODUCES something tangible!

Bob, Many jobs were at stake with the banking situation, the vast majority being average workers. Same situation with the auto makers. In both cases the executives got obscene amounts of compensation for in effect driving their companies to the ground. Lets not try to make them different, those senators do reflect what the majority of americans in every poll I have seen say: no more. If management and labor don't come to an agreement which clearly spells out how taxpayer money would be used to change themselves for the better, then the answer has to be no.

I don't get it either.

Thank heavens George Bush does get it so we won't have to find out just how deep the global depression would be if GM tanked......yet.
(I know, you want to hate Bush 24/7 - but on this he's right and we can all thank God for that.)

Hopefully, come January the Dems, already in debt to the UAW for last months election results, will do more and will maybe even do something really patriotic like slap a massive tariff on Japanese cars.

Better yet have the Navy turn a few Japanese freighters around on the high seas and send them home.
Japan is NOT a "trade partner" of ours, on the contrary their actions more closely resemble rape.
(70% of the Japanese nameplate cars in the US are fully made in Japan)

No European, Pacific Rim or Asian nation blocks our produce or products like Japan does.
No one else is even close for that matter.

Why my party has done nothing about it is beyond me, I pray yours will.

Anonymous, how can you say that they are the same? The fatcat management of the financial shitpile got handed a huge sack of cash, no strings, no accountability, nada, zip, zilch.
But, because there is a union of the working class involved in the auto rescue, the oh so seriously responsible solons now want to micromanage the workers' paychecks and the retirees' benefits over a comparatively miniscule loan. Even GWBush supported this bill.
Maybe if the bank tellers or the Wall St office clerks had unions, the situation would have been a smidgen different.
The contempt and scorn these Repos show for the average American is out in plain view. Seeing is believing. Take a really good look. And wait for the backlash.
oldswede

I would normally be against restrictive tariffs such as ACR suggests, but I find myself torn on this particular issue, due to the MASSIVE financial support given to European & Asian automakers by their governments (something akin to an ongoing bailout).

Perhaps a tariff law would simply state that the tariff would be equal to the amount of government support given to the automaker?

Anon, the big problem I have with the bank bailout is the near TOTAL lack of oversight built into the package. I'm fine with spending our money in a way that protects jobs and promotes responsibility, not the free-for-all cash grab the bank bailout turned out to be.