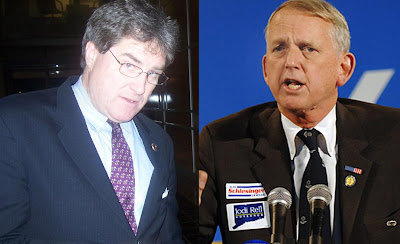 Does this appear to be a conflict of interest to you?

According to a story in the Danbury News Times, Republican Senate candidate Rob Simmons says it is when the wife of the chairman of the State Republican Party works for his chief rival.

Bibisi's position is no secret. But some Simmons supporters -- and even the campaign -- have begun questioning the situation, grumbling that Healy's role as unbiased referee in May's nominating convention has been compromised by McMahon's self-funded money machine.

An unnamed person in the Simmons camp goes on to say that they've lost confidence that Chris Healy can remain unbiased when his wife has such a significant financial stake in Linda McMahon staying in the race. Healy admits he asked Simmons if he would be open to running for the congressional seat Simmons lost to Joe Courtney in 2006, which would obviously clear the way for Linda McMahon to have a free shot at the Republican nomination and continue her campaign (and, most likely, Bibisi's employment) through the November election.

I'd like to hear from the many Republicans who read this blog just what they think of this controversy. Is it just a steaming load of horse pucky (sorry to use such extreme language here) or is there real concern about Chris Healy's ability to remain completely impartial when his household may directly benefit to the tune of six figures by the time McMahon's campaign is over?

(...and anyone who uses the lame "well, so-and-so does it, so it's okay," argument will be ceaselessly mocked)

UPDATE: After brazenly stating "...if you can find me one on or off the record who will tell you they’ve had a conversation with me about (changing their support to McMahon in) this race, then I’ll quit", Healy stepped on his dick!
Posted by CT Bob at 2/22/2010 09:26:00 AM

No comments at all from our brave Republicans on this issue.

Why am I not surprised?

"An analysis by the American Foreign Service Association, for example, found that Obama has stuffed the diplomatic corps with more political appointees (i.e., cronies) than any president in the past 40 years. Only a year into the administration, close of half of the president’s biggest donors already have federal jobs."

I went to the AFSA website and searched for a long time, and couldn't find anything resembling your quote. Otherwise I'll consider it a typical FoxNewsChannel falsehood.

Of course, what that has to do with Healy twisting GOPer arms to support McMahon is beyond me, but I guess it makes sense to you.

(OT: I finally saw "Boondock Saints II: All Saint's Day". About as much fun and silly as the first one. Glad to see Duffy get another chance in Hollywood. I tend to root for the anti-establishment assholes, which probably says more about me than anything else.)

Jeeze Bob, give me a bit more credit ok? I think you just called me a shill...shame on you.
USA Today (Gannett Libtard Central Newspapers) is hardly Fox News sources http://www.usatoday.com/news/washington/2009-10-28-bundlers_N.htm

No, I'll just sit back while you get all worked up over this Healy guy and ignore your President and his lying and pathetic attempts at trying to act like a straight up and honest person rather than what he really is, a Chicago thug....oh and a Hypocrite.

USA Today is a "libtard" paper? What are you smoking?

I see they left out the exact Bush II numbers, although I expect they're at the upper reaches of the scale.

And let's not forget that he gave Dick Cheney's friends the plummiest of plum contracts; a no-bid license to completely rape the Treasury while pillaging Iraq! Which, in terms of recompense, beats an ambassadorship to Finland!

Re: Healy. So you don't mind that Healy is pushing for his wife's boss to win? What do you have against Elmer, er, Rob Simmons, anyway?

Me, I love Chris Healy! He's as entertaining as Jim Amann on a good day.

You know what Bob, I think I like being off topic with you better ie: "Saints" heh.

I don't smoke, but seriously, Gannett Co. is so widely considered Left it's not even up for debate. ( funny our perceptions though, Katie and Olby are considered middle roaders to you LOL!)

And no on Healy, I don't care becuase at the end of the day I believe his days are numbered ala Amann. I actually like Rob very much, in fact I worked to help his elections in the past and will again this time.

We all know the no-bids have continued under Obama so lets not do the tit for tat. [Hint Halliburton is still around]

I have to agree. I'm definitely more fun when I'm not talking politics. Believe me, my wife tells me that every single day!