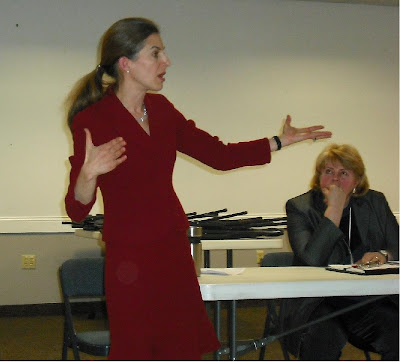 CT Republican Party chair Chris Healy (also known as the "Irish Arm Twister" and "Linda McMahon's Water Carrier") has joined the lawsuit to determine if Secretary of State Susan Bysiewicz, an attorney for over 20 years, is eligible under state statute to serve as Attorney General.

Healy hired a Hartford lawyer named Eliot B. Gersten, to intervene in the lawsuit.

The suit hinges on whether the intent of the state statute that says an AG must have served at least 10 years in the "active practice" of law is constitutional under the State Constitution, which only states the age and residence requirements to hold the office.

Also, the very definition of "active practice" is sufficiently nebulous to induce all the lawyers involved into giddy reveries filled with dollar signs and bold headlines.

Susan will speak tonight at the Milford DTC (info in link), along with another candidate for Attorney General, former Majority Leader George Jepsen. Also speaking tonight is gubernatorial candidate and Stamford Mayor Dan Malloy. The public is invited, of course.
Posted by CT Bob at 2/25/2010 08:57:00 AM

Politically this isn't really a bad thing. As someone who has run campaigns in the past, this hiccup will just get Susan Bysiewicz plenty of FREE name recognition. She'll be found eligible and will have lots and lots of FREE positive press to show for it. Smart move Healy.

I tend to agree. Susan enjoys ridiculously high name recognition, the result of being on every ballot in the state every four years, and there's simply no GOP candidate that has shown even one iota of seriously challenging her.


Hrmm, kinda like Blumy's new run. I'm not usually into predicting races, but I'm also a realist..he's a shoe in.

Really? I'm not ready to break out the Moet just yet.

I'm anxious to see how he does in tomorrow night's debate against Merrick Alpert; the very fact that Blumenthal agreed to the debate seems like an unnecessary risk, where he has almost nothing to gain but a lot to lose.

I'm going to post Alpert's video later today in anticipation of the debate. He acquitted himself nicely at our DTC meeting if you ask me. Sure, he ain't Ned Lamont from 2006, but I think he'll gain some traction tomorrow if he does a good job.