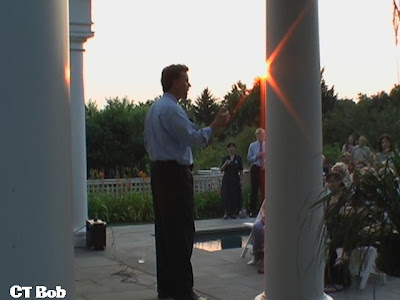 (photo from 2006 campaign)
This morning Ned Lamont made it official with his announcement that he is running for Governor, during a speech at the Old State House in Hartford on a snowy New England morning.

I would have enjoyed being there, but sadly there was the matter of several driveways that needed clearing this morning. By the time I'd finished, Ned had already announced his candidacy.

In his speech, Lamont used football analogies when he alluded to the "defensive crouch" Connecticut has been in for the last 20 years, and he promised to take our state on the offensive:

I see many friends here today who were right here with me in 2006. We stood up and challenged the political establishment, challenged the conventional wisdom -- and we made a difference.

Yes, we have a fiscal crisis in this state, but more importantly, we have a crisis of confidence that requires we stand up again.

Connecticut will be a state that works for all of our families.

No more exploring -- I am running to be Governor of the great state of Connecticut.

We will make a difference, we will win -- and Connecticut will start winning again!

Lamont also discussed ways to improve the business climate in our state, by stressing the importance of using the knowledge of proven business leaders in key positions in government:

Hire real executives to manage our departments -- from in or out of government, Republican or Democrat -- hire the best.

Over at CT Political Reporter today, Don P launched one of his factually weak tirades against Lamont. I guess we will see a lot more of this.
My favorite line is:
"Lamont, best known for his ardent opposition to a war policy in Iraq that pretty much everyone agrees has accomplished the goals of ex-President George Bush, . . ."
Don't really know where to start with that, except to ask, 'What were those goals, again?' They seemed to change with the wind.
oldswede

You have to know how to interpret his claims. "Pretty much everyone" basically means "people Don Pesci agrees with"!