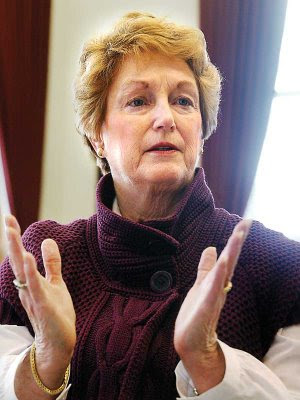 ("Money? What money?")
In what may be the crowning achievement of an outstandingly mediocre career, Gov. Jodi Rell (R) is being accused of squandering the opportunity to get the state well over one billion dollars in various kinds of federal funds.

Jon Kantrowitz in My Left Nutmeg, the Hartford Courant, and the New London Day all detail the disastrous lack of leadership Jodi Rell has provided the state.

Gubernatorial candidate Ned Lamont responded to the news with a scathing press release:

"The news today that Connecticut has missed out yet again on hundreds of millions in federal transportation dollars is sadly all too familiar. This is just another example of how we can no longer afford to do business as usual here in Connecticut. We can no longer afford to allow our jobs and infrastructure funding to go to other states simply because they are more aggressive than we are. We need a Governor who will fight for every job and every bit of money for our roads and bridges that we rightly deserve."

"Connecticut is also expected -- due to inaction -- to miss out on $200 million in "Race to the Top" funds to revitalize our schools. Transportation and eduction -- these are the keys to our state's economic future. As Governor, I will roll up my sleeves, work with our leaders in Washington and fight to ensure Connecticut is at the forefront of this century's transportation and education revolutions."

Jodi Rell is right to retire. She wanted to get out before it became too obvious that she simply can't handle the job. Sadly for her, it's bound to attract attention if you leave a gargantuan pile of cash on the table that could have been used to create jobs, improve education, and rebuild our infrastructure.

Maybe now it will become apparent to voters in Connecticut that, other than being a kindly-looking grandmotherly type, she's done nothing to deserve her ridiculously over-inflated approval ratings. I fervently hope the Q-Poll includes this in their next survey:

"Do you approve of Gov. Rell missing out on over one billion dollars in federal funds?"

Well at least she didn't Blow a trillion dollars we don't have. Unless of course you're just holding out on us Bob, whats to say she didn't save us all ( that would be the Country aka USA) money that our kids and grandkids need to whore themselves out to the Chinese to repay.

C'mon this such BS....but I do understand you're in the tank for this clown so OK.

The stimulus is what it is. It doesn't matter one bit if you like it or not. Nothing is going to change the fact that it exists.

That being said, how do you justify our governor's failure at getting a fair share for Connecticut? I'm curious to hear your views. Other states are going to get our share because of Rell's ineffectiveness.

She oozed to the top on John Rowland's slimy trail of corruption. Should we be surprised that she didn't bring competence to her office?
Republicans say that government is not the answer. Republican government is certainly not. They make sure of that.
oldswede

I just read the article in the Courant. No where do any members of the CT delegation blame Rell. In fact they seem angered at Ray Lahood, and Jim Himes said he saw the proposals fot FFLD County and said they were fine.

God help CT democrats when Rell is gone, even with their veto proof majorities in the statehouse they still need the strawman Rell to blame for THEIR failures.

Mr. Lamont's press release is a crock, no Democrats quoted in the article even mentioned Rell's name. Thank's Ned now we can prepare for another election cycle of divisiveness.

Believe you me, if the Democrats elect a governor and keep their majority, and STILL can't get things done after November, I'll be right there with you to bash the living hell outta them! That's a promise.

God help CT democrats when Rell is gone, even with their veto proof majorities in the statehouse they still need the strawman Rell to blame for THEIR failures.

Considering the Sierra Club is lobbying Washington to put New England Republicans on an endangered species list; there's no excuse for the Democrats to not simply do whatever they want....except they don't seem to know what that is.

We all saw it coming didn't we?
Seriously, Don Williams is their idea of leadership???

They'd be ashamed of themselves if they had any - but they rather obviously don't!