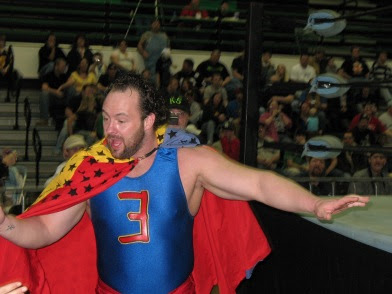 (Look! The "E" is backwards! Because he's stupid! Get it?)
Rick Green from the Hartford Courant describes Senate candidate Linda McMahon's un-ironic use of a developmentally challenged wrestling character named "Eugene" in her WWE ring plays:

McMahon the Senate candidate is all about a better future. Eugene is the pathetic wrestler from an old WWE story line. He gets mocked, beaten up and stuffed in a toilet, and generates loads of laughs.

So where the hell is that loopy big-mouth Sarah Palin on this issue? Does Palin think it's okay for McMahon to humiliate and beat up a "developmentally challenged" character, as long as you don't call him a "retard"?

Or maybe this is just another example of that famously witty GOP "satire" we've heard so much about lately! Maybe Linda McMahon is using Eugene to demonstrate the idiocy of the left! Yeah, that's the ticket! Every time Eugene's head is stuffed in a toilet, a Tea Bagger gets his wings!

McMahon goes on with her unapologetic attempt to defend herself about her choice of characters:

"There was never any intent of WWE to make fun of anyone who is developmentally challenged in any way," McMahon told me. "It was to show how you can rise above your circumstances. He always had this quality of believing he could be anything he wanted to be. It's a soap opera. It's all a matter of taste."

Ah, it's just a matter of taste! I guess I just don't have a taste for seeing "retards" getting beaten up.

McMahon's pathetic attempt to trivialize this and many other examples of WWE depravity won't fly with most voters. Connecticut voters tend to see through obvious bullshit like McMahon's. And we'll probably see a lot more of Eugene in political ads this year.

Meanwhile, in the race withOUT the "Wrestling Queen" --

Figueroa shows his grass-roots strength in this new on-line poll:

Yes, and everyone knows that on-line polls are exceedingly accurate and scientific.

I'm sure Figueroa is a swell guy, but he's got zero chance in that race.

With all their money, AND their vast network of SUPER-enthusiastic supporters, Lamont and Malloy must have had their people flooding the poll -- in order to get their 14% and 12% numbers (respectively) -- vs. poor Figueroa's 71%.

Heh- Just because the mainstream press anoints "favorites" based on their war chests and "name recognition" -- in a self-fulfilling cycle that gives us the losers we so often get in office -- doesn't mean that smart blogs have to do the same!

Dave, I never even heard of that poll. But anyway I tend to ignore online polls. as I'm much too busy being a super-enthusiastic blogger to bother with them! LOL!

So have him contact the local DTCs to arrange to speak to the Democrats. If he's persuasive enough, he'll get support. Malloy, Lamont, Bysiewicz and quite a few others have already made the rounds.

I remember another fake "idiot" from days gone past. His stage name was George "The Animal" Steele:

"As Steele recalled in a later shoot interview, his infamous "Duh-dahh" interview style happened by accident. Throughout his career, Steele prided himself on being able to cut eloquent and effective promos, and ranked his mic skills with the best in the business. At a WWF TV taping in the early '80s, he was cutting one of these promos when Vince McMahon cut him off, and reminded Steele that his gimmick was the "Animal", and for an animal he was "making too much sense". Incensed, Steele did a second take of nothing but garbled and incoherent syllables ("Duhh-dahh"). Steele did this deliberately, and out of pure frustration, thinking that McMahon would acquiesce and allow Steele to cut his normal, eloquent promos. Much to Steele's shock, McMahon replied, "That's exactly what I want!", and this would remain Steele's interview style for the rest of his WWF run."

Pretending to chew up the turnbuckle coverings (don't miss this vid):

All completely faked; I once saw this gut drive out of the Naugatuck H.S. parking lot after a show in a Buick Riviera wearing a pale blue double-knit leisure suit. WTF? I nearly dropped my beer!

No, Figueora's skipping the detox meetings and going right to the people to get signatures. The grass-roots way. LOL.

Funny. Well, good luck to him. Running as a Democrat without even trying to get DTC support makes him quite a longshot indeed. Even Merrick Albert hit all the DTC meetings.

Well, Figueroa never CLAIMED he was another Merrick Albert....