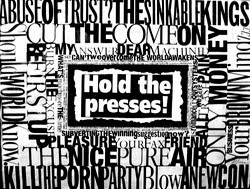 Regarding the Q Poll released this morning, here are the candidates' press releases:

"While more than a thousand of our volunteers reached out to voters, Ned and Mary spent the weekend pounding the pavement, asking families to vote for a better future for Connecticut," said Lamont Communications Director Justine Sessions.

"Democrats know that Ned is the only one in this race with a positive vision for our state, the experience to create jobs, and the ability to beat the Republicans in November. When they go to the polls tomorrow, we're confident that they'll choose Ned.

And then there's Dan Malloy:

“The poll reflects what we’re seeing and hearing every day on the campaign trail: Dan’s got the momentum. People increasingly see him as the better qualified candidate, and the person best able to provide the leadership this state desperately needs. People are rejecting Ned’s sleazy and untrue attacks on Dan, and they’re rejecting Ned’s attempt to buy this election.”

Just the press releases say it all. One is all "Whine-One-One", call the Whambulance; and the other, positive and classy.

Scroll down. You spent days complaining about Malloy's attacks. Hypocrite.

Yeah, any time you hit a bully back, he starts crying.

But 3 rights make a left.