Blumenthal sitting this one out 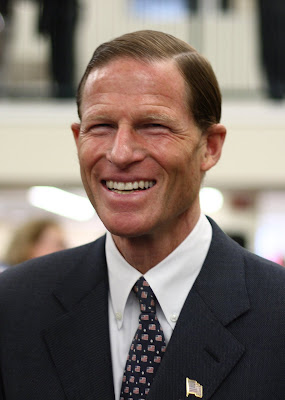 All of a sudden Dick Blumenthal is thrilled beyond belief that he's our Attorney General, and from his words this morning you'd think he never gave a thought to running for any other office.

Stamford Mayor Dan Malloy issued a statement today, saying he'll have an announcement tomorrow. Anyone wanna guess what THAT will be?

So it looks like the Democrats will likely have Dan Malloy, Former Speaker Jim Amann, and Secretary of State Susan Bysiewicz all vying for the nod. Once Malloy officially announces, we may see one or more candidates drop out, or even possibly one more throw their hat into the ring.

In trying to understand why Dick took so long to make his decision, I thought about other options he might be focusing upon. Such as a Senate challenge to Joe Lieberman in 2012. Which, if he took the initiative in 2006, he probably would have prevailed in the primary; and with all his years as a Democratic "insider", he would likely have gotten Joe to call it quits after losing.

Plus, I'm guessing that Dick believes Governor Rell is unbeatable in the coming election. I don't know if that's true, judging from the huge fiscal crisis facing the state, for which she'll share a part of the blame. The 2010 election is going to be a big year to shake things up, and if the Democrats don't tackle the economy with suitable results, we'll probably see significant Republican gains in both houses.

But this whole thing where Dan promised to wait until Dick decided whether HE was going to run may hurt Malloy in the short run. Judging from his original statement where Dan felt that Dick would announce soon after the November election, Dan has lost nearly three months of campaigning and fund raising. But with another 21 months until the election, I don't think that he'll have any problem making up for it.

Another possible twist in the political landscape is the possibility that Chris Dodd might either decide not to run for reelection in 2010, or perhaps be removed from office if his little mortgage financing thing doesn't go away soon.

Significant republican gains? Not if they were banned! This is what I have been saying Not outlawing the repukes will mean more dead children, more old people with no heat etc.etc.etc. Somehow the super majority democrats have got to find a way to ban them or at least make it hard for the fascists to get on the ballot. Short of that, find as much slime as possible onenough of their candidates to ensure their defeat. If they regain power then humanity will suffer.

Were you bullied as a child?

If Rell manages to convince the voters that the financial mess is either (a) caused by the economy ("Look at California! Look at New York!"), or (b) the fault of legislators ("Look at Gaffey!"), she'll be tough to beat.