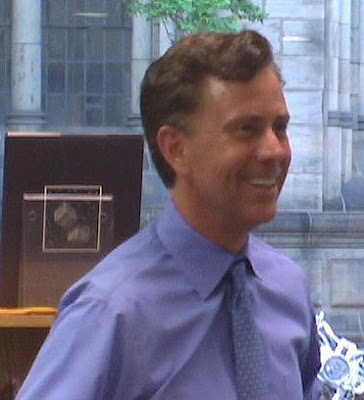 “We’re not bankrupt, but we’ve been flat as a pancake for a generation,” he said of the state economy.

Unlike Rell, who has flat-funded education, Obama has proposed increased spending for priorities such as education and health care, he said.

“We haven’t added any new jobs and many young people are leaving,” Lamont said of Connecticut.

He called her budget — $38.3 billion over two years with cuts meant to correct predicted billion-dollar deficits — a smattering of quick fixes with little in the way of important changes.

Rell recommended that people turn out lights when leaving their offices and not travel out of state as a way of paying down the deficit. Lamont hit at her intention to borrow against the state’s rainy-day fund.

“Her plan is extraordinarily shortsighted, and you young people should be outraged because they’ve borrowed against your future,” he said to the students.

I am delighted to see Ned daring to criticize Governor Rell and her short-sighted budget. Actually, it’s not really all that daring, it only seems so because Democratic leadership in the state isn’t doing it. Then again, we’re talking about the same folks who were too scared to even censure Joe Lieberman after he stabbed them in the back, repeatedly.

In any case, Ned’s criticisms of Rell and the budget are spot on.

Education is the safest investment in town. It is critically important not to underfund or flat-fund our state’s institutions of higher education, because the Community College System and the State University System will play a vital role in helping Connecticut residents–and by extension, Connecticut itself–bounce back in the years to come.

It is downright shameful that Governor Rell is demanding these kinds of short-sighted cuts before considering any avenues for increasing revenue. By doing so, she is putting her bid for re-election before both the short and long-term welfare of the state. For an accidental governor, this lack of leadership and abundance of poor judgment could be excused but for the fact that she sought and won re-election.

In her 2006 campaign, she “stayed away from any flashy campaign promises,” according to this NY Times bio. Who would have thought that promising nothing meant we might actually end up with it?
Posted by CT Bob at 2/19/2009 03:12:00 PM

Who would have imagined that five years ago Senator Chris Dodd would become one of the vilest villains?

Please add our site to your blogs.