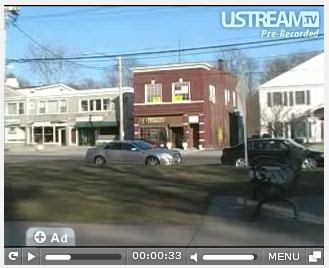 I've been exploring Optimum wifi recently, and today I tested a fully portable, battery-only remote streaming video setup, and it was a success.

As long as I had a good strong signal, that is. Ustream tends to really need a solid wifi connection in order to stay connected to the video server, and any time my wifi signal got less then four bars, the video stream would drop. Four or five bars seem pretty reliable. Laptop, video camera, firewire cable (a USB camera will work, too), and wifi connection is all you need to get started. I also used my external mic since the audio is PC based, so I plugged the mic into my computer.

I managed to broadcast live video from a bench right in front of City Hall for five minutes, but then I started getting cold so I left. Jesus, I don't know why I need to do this stuff in the freezing cold!

Anyway, my Ustream channel is called "CTBob" (naturally), and even though there's no content uploaded yet here's the link: http://www.ustream.tv/CTBob

Depending on which events are coming up, I may be broadcasting live video in the near future. And I'll have the ability to record and store video on the channel, for later broadcast.
Posted by CT Bob at 2/25/2009 05:02:00 PM