What now for Roland Burris? 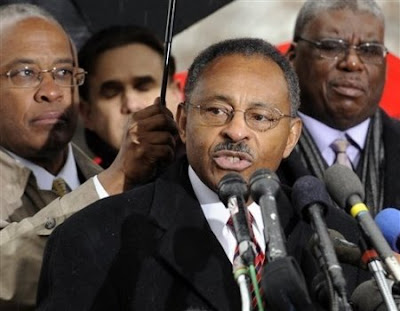 Burris made the admission to reporters after releasing an affidavit over the weekend saying he had more contact with Blagojevich aides about the Senate seat than he had described under oath to the state House panel that recommended Blagojevich's impeachment. The Democrat also said in the affidavit, but not before the panel, that the governor's brother asked him for fundraising help.

So it appears that Sen. Burris may have lied under oath when asked if he'd spoken to anyone about raising money for Blagojevich's campaign. There are already calls from lawmakers in both parties for his resignation, but Burris is very unlikely to heed those calls anytime soon.

If these charges have substance and Burris refuses to resign, there will likely be no alternative left except impeachment. The only way a senator can be removed from office is if he dies, loses an election, resigns, or is impeached and convicted.

Surprisingly, it's nearly impossible to remove a senator by impeachment. Since the Constitution was ratified, Sen. William Blount was convicted of treason and expelled in 1797, and then fourteen more senators were expelled in 1861-2 for supporting the Confederate secession. Since then, no senator has been impeached and convicted.

Several senators have voluntarily resigned after facing a potential impeachment, most recently Bob Packwood in 1995. But if Roland Burris hangs tough and decides to fight it out, I think it's going to be very tough getting 2/3 of the senators to convict one of their own, regardless of how little time he's served.

As I've mentioned previously, this entire Burris fiasco would have been avoided if Harry Reid hadn't been such a sissy-mary about requesting that Illinois hold a special election to fill Barack Obama's vacated seat. But Reid was too chicken to risk letting the seat go up for an election where a Republican had maybe a 1 in 8 chance of actually WINNING it!

So basically, we can all see that Reid's plan failed miserably, and we're just as likely to see that special election he dreaded so much take place some time later this year when Burris is finally hounded out of office. You can bet the Illinois GOP will be completely energized by this turn of events, and they'll be much more likely to field a winner than the thoroughly disheartened Dems will.

Meanwhile, Wisconsin Democratic Senator Russ Feingold announced he would introduce a bill proposing a constitutional amendment to require Senate vacancies be filled by election, as the Constitution already requires for vacancies in the House of Representatives. At least there's ONE guy in the Senate who knows enough to look forward.
Posted by CT Bob at 2/17/2009 04:47:00 PM

I believe the anon Democratic source puts it best : "He's in deep sh*t." (as quoted in the short and formerly cute George Stephanopoulos' "Bottom Line" on ABC News

Yes he is. But there wouldn't even BE any shit for him to be in if the nutless wonder Harry Reid showed a little courage and let the voters pick Obama's replacement.

Does anyone really think the people of Illinois would give Barack's old seat to a goddamned REPUBLICAN?