We got the stimulus...now what? 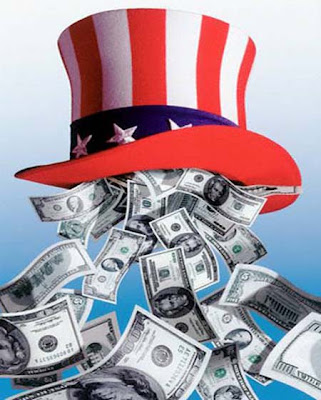 OK, so last night the Economic Stimulus bill passed the Senate by a vote of 60-38. The vote was held up because Ohio Sen. Sherrod Brown had to fly back from his mother's wake to be the deciding vote. Apparently the GOP, who ironically label themselves "The Party of Family Values", couldn't be bothered to cough up one more lousy vote so Sen. Brown could be with his family at this very sad time.

Also, former Sen. Norm Coleman's GOP-endorsed strategy of arguing every single ballot in the Minnesota election recount has prevented Al Franken's inevitable seating in the Senate, where he would have been the 60th vote for the bill and allowed Brown to mourn properly.

And the bill didn't gain a SINGLE Republican vote in the House, despite the Democrats gutting over $50 billion from the bill, which goes to show you that the GOP doesn't believe in any form of compromise unless it involves total capitulation. Among the senators voting against it was Judd Gregg, Republican of New Hampshire, who withdrew this week as the president’s nominee for commerce secretary.

Lesson learned. I doubt we'll see anything similar from the House Democrats any time soon, until the Republicans learn the true meaning of compromise. President Obama has already indicated that he'll control the message from here on in. Apparently, it's the only way you can get through to House Republicans.

So the bill will appear on the President's desk shortly. Then they can get on with trying to save the economy. Which is a tall order, and success will only be measured in degrees of effectiveness. Nothing is going to magically tix our failing economy overnight, that's for sure.

That's the big question. Once the money starts flowing, people will be watching to see how many new jobs are created, how many existing jobs are saved, and how much the bill is going to help put liquidity into the economy and ease up credit. I expect it will be a while before we see results.
Posted by CT Bob at 2/14/2009 03:51:00 PM

Let's see? The biggest tax cut in history... And the GOP, in near unison, voted as a block against it.

As much as I was against most of the tax cuts, since we really need the money to bail out the failed republican economy of the bush years, it will be entertaining to watch the far right wing try to explain this.

Campaign ads that right themselves.

Or "write" themselves even, but I know what you meant! LOL

Yeah, the 2010 mid-terms are probably going to be a total disaster for many House Republicans if the economy makes even the slightest bit of a recovery between now and then. Every Democratic challenger has the ammo he needs to oust the wrong-voting incumbent. I can't wait!

Right about the write. Typing fast in between playing with kids and the mind was racing faster than the fingers should ever try to go. lol

To be honest? I would like nothing more than to have it turn around that fast. But I am not sure we will see signs of recovery that soon. I would temper that expectation with the reality that this is not your typical recession.

If your expectations are too high you play into the hands of people that will be listening to Oxy-Rush screeching for all the way to the elctions: "See! It failed because it was a communist idea!"

You have to figure that is what he is hoping for. A really long recession so he can claim a false victory.

I know that my congressman wouldn't vote for the bill because NO ONE had the time/opportunity to read it. It was being rammed through so Nancy Pelosi could go on her European trip and meet the pope. Talk about hypocrisy on the "family values" front all you want, but what business does congress have passing the largest piece of legislation in our history without a full reading and vigorous debate? A pork sandwich is still a pork sandwich even if you scrape off the mayo. I also will like to see the numbers on this "largest tax cut in history" balanced against the expiration of the Bush-era tax cuts, which will amount to the largest tax increase in history. An extra $13.00 a week for a few months is not going to change my spending/saving habits.
The fallout from this debacle will, indeed, be interesting to watch. I'll agree that Bush was a lousy domestic policy president. However, I'm weary of any and all ills being laid at his feet when people like Barney Frank are not being held responsible for their participation in the housing crisis. Many economic cycles have converged upon this point in time to cause much of our woe, but the housing bubble burst was the direct result of irresponsible lending being forced on banks by the CRA (started by Carter and put on steroids by Clinton). When concern was being expressed in hearings about the possible collapse of the mortgage industry due to so many subprime and flat-out stupid loans being given to people with no means of repaying, Barney Frank railed that we should "have even MORE 'affordable mortgages' out there" -- blind as a freakin' bat. And WHO are we allowing to "fix" this problem? The same offenders who caused it. This "stimulus" is, in my opinion, nothing but political grandstanding (unfortunately with ours, our children's and our grandchildren's money). There was NO need to rush this thing to a vote (except the scaremongering by our new president). Did our congress learn nothing from the idiots who signed ARM loans without reading the fine print? The devil is in the details... and when the details come out, I hope we don't end up with the Devil. I really do.

Isn't it curious that the same Republicans who from 1994-2006 rammed through legislation (including the USA PATRIOT Act) w/o giving anyone a chance to read the bills are now squealing like castrated pigs?

Clay, a couple of things - please use paragraph breaks. When you string a dozen sentences together without a line space, it becomes an unreadable "wall of text". Try taking a breath and hit the Enter key a few times every minute or so.

Next, the "Nancy European trip" accusation is typical right-wing propaganda. The conservative talk machine is screeching endlessly with that lie, and not reporting that Ms. Pelosi herself said if they hadn't passed the bill she would absolutely have canceled her trip. BTW, this isn't a vacation; she's meeting with the Pope and members of the European Union.

Also, as WH Bob mentioned, the White House held back the National Intelligence Estimate until immediately before the vote to authorize the war in Iraq. In fact, I have it on video when our own former GOP Rep. Chris Shays admitted in 2008 that he STILL hadn't read the NIE!

Lastly, since when has a Republican been against a tax cut EVER? Since when have Republicans been economically responsible when they never flinched in giving George Bush everything he wanted and more for that stupid evil war? Why does it take a Democratic president to get you guys thinking about your "children and grandchildren" all of a sudden?

On my way into work this morning I was listening to our home town local AM radio station (WICC). There was a brief discussion of the impact of the stimulus on Connecticut. I was wondering if anyone has detail on how CT will benefit?

I heard something about a tax break if you make less than 197k a year and new funding for the school systems. The details were few, so if anyone can expand on / correct this, that would be great.

check the article I posted this afternoon (2/16).

The Repub's in South Carolina have the 2010 elections in the bag. Their governor is not going to accept their share of the bailout money. Therefor it will be a failure. The Democrats loose. Pretty smart, huh? J.C. Sr.

Wait, the gov. of SC isn't going to let the state accept stimulus funds? Where did you get that from?