The Myth of Bipartisanship 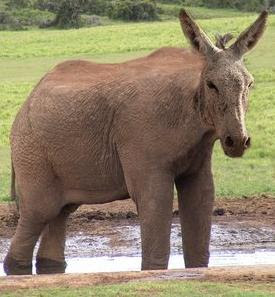 Outside of our imagination, does this animal even EXIST?

While I'm at it, is "bipartisanship" even a word?

Well, I guess it is, because my spell checker didn't tag it. But that fact doesn't seem to translate well to "real life".

We're only three weeks into the Obama administration, and already it appears that all the dream of both parties working together to fix the financial crisis is fading.

Yesterday's debate in the Senate was driven largely by the minority party's wish to pare down the stimulus package to remove "wasteful" spending, such as for insignificant little issues like education, child nutrition, infrastructure, etc. Things that create jobs and put value back into our economy.

Why would we want to waste money on stuff like that, when we can better spend it on CEOs of failing corporations to take ridiculously expensive spa treatments and high-end retreats? What's wrong with Democrats that they can't seem to comprehend the importance of a relaxed and pampered ruling class?

But the Republicans are successfully pressing the only advantage they have, the threat of a filibuster, to bully and control the Democrats into giving in nearly across the board. Why are they so successful, while the Democrats were so lousy at it when they were in the minority? I'd guess it has something to do with the Democratic leadership, but that's a whole 'nother discussion.

The result will be a severely weakened and semi-effective package that will probably fail to jump start the economy, giving the GOP something to blame the Democrats for. Which is likely what they had in mind in the first place.

This brilliantly funny quote from John Cole (via DailyKos) effectively sums up the problem that exists between our two parties:

I really don’t understand how bipartisanship is ever going to work when one of the parties is insane. Imagine trying to negotiate an agreement on dinner plans with your date, and you suggest Italian and she states her preference would be a meal of tire rims and anthrax. If you can figure out a way to split the difference there and find a meal you will both enjoy, you can probably figure out how bipartisanship is going to work the next few years.

Until the GOP learns how to enjoy Italian food; or indeed, any Mediterranean-style cuisine (we're willing to compromise that far, at least), it's going to be difficult to find a restaurant that will make us both happy.
Posted by CT Bob at 2/07/2009 12:05:00 PM

"Why are they so successful, while the Democrats were so lousy at it when they were in the minority? I'd guess it has something to do with the Democratic leadership, but that's a whole 'nother discussion."

It is not a 'nother discussion. It is the same one. Weak leadership that was catering to election gains instead of doing what was morally correct and honest is at the heart of the problem.

We suffer the consequences but it is coming from both sides of the aisle all of the time.

What we are seeing is a diabolically effective effort to transfer responsibillity for the economy to Obama. The package is now his with all Republicans voting against. We will now hear the Republicans pontificating every night that the economy hasn't yet recovered because of the faulted Obama bill.