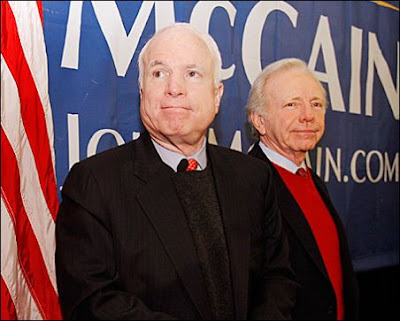 Immediately after the election, when it began to look like the Democrats would end up just shy of the 60 member threshold needed to defeat filibusters in the Senate, President-elect Obama and Senate Majority Leader Harry Reid both started making conciliatory statements towards Joe Lieberman.

Many of us were still angry over Lieberman's betrayal to the Democratic party by campaigning for McCain/Palin, going as far as to speak at the Republican National Convention. I think Joe Lieberman's actions were motivated simply out of personal interest, because he had much to gain by hitching his wagon to the McCain "Straight Talk Express" if they somehow prevailed. Perhaps a V.P. nod, almost definitely a high level cabinet position. Whatever. Lieberman knew he'd pretty much cashed in his chips with the Democrats by his relentless support of George Bush's bellicose policies, and by stubbornly refusing to accept the results of the Democratic primary in 2006 and accepting massive GOP support to fund his reelection as an independent.

So it would have surprised no one had Lieberman been stripped of his DHS Chair and unceremoniously expelled from the party following Obama's victory. Except for one thing. Suddenly, the Democrats needed him again to have a chance of hitting that magic number.

Because this week it appears that Barack Obama will offer the position of Commerce Secretary to New Hampshire's Republican Senator Judd Gregg, and Gov. John Lynch of New Hampshire, a Democrat, will have the task of appointing a replacement. New Hampshire is one of those states, like Connecticut, that allows the governor to seat a replacement senator. Lynch will likely select a Democrat, and give them the super majority they want in the Senate.

This depends of course on whether Gregg will accept the position, and whether Lynch will appoint a Democrat. Gregg is under intense pressure from the GOP to retain his senate seat. And, if you remember that New Hampshire is famous for their political independence, there's no guarantee that Lynch will select a Democrat. So this can all be moot depending on what happens.

But what won't change is that because of Harry Reid's efforts to "forgive" our junior senator, we're stuck with Joe Lieberman for the next four years. If things don't work out perfectly, the Democrats will once again look weak and ineffectual, and the Republicans will be further emboldened to challenge President Obama on every single bill he supports, simply because they can.

With the reality that Lieberman is an unreliable vote for almost anything left these days, it renders the super majority, cloture proof Senate point useless, IMHO.

Maybe. But I tend to see Lieberman as opportunistic enough to go with the party that's in charge. He's already said a number of things that are completely counter to what he stated just six months ago, so he's going to be more loyal now than he was for the last six or so year.

I don't think he's going to be quite the GOP shill that he was previously. Not with the way they treated him.

so far, joe "mr. unpredictable" lieberman has voted the same with dodd (and the majortiy of democrats). confirmations, ledbetter bill, stimulus package... hes been, like always, a steady democrat vote. yes sir, hes a wild one...

Bob. when are going to get off your high horse and let good-ol-Joe heve something to say on your blog. It might make all the difference. J.C. Sr.

I'd say Bob should allow ol' Joe to post on his blog once he tells the public about what happened to the 387,000 in petty cash he dished out before the '06 primary.

...oh yeah, an apology from Joe to the blogger and the Lamont campaign about the whole Lieberman campaign site crash would be nice also (...and I'm not holding my breath).

For the record, this is an open invitation to Sen. Joe Lieberman to write an article for my blog. If he does so, I'll agree to post it in it's entirety, and I'll even change my banner to reflect that he posted a comment here.

Forward this to his office, and I'll sit back and wait for my email to fill up with acceptance notices.

Yeah, Lieberman is such a reliable Democrat.

That's why he went to the Republican convention and campaigned for the McCain/Palin ticket, as well as supporting Norm Coleman over Al Franken.

Sure Joe will vote with the Democrats when it's in his own immediate interests. But that won't convince me to put any trust in him...

Sorry guys but your political world is about to crash and burn the same as capitalism. Riots in france, riots in russia, greece and iceland. Soon riots here and the price will be steep for capitalists, politicians and party members who continue to oppress the workers. Don't you feel it? REVOLUTION is in the air and soon this ugly beast known as the US will be brought to it's knees, humiliated and destroyed by those it has long trod on. Whether poor or middle class (who the powers that be destroyed) WE the workers will finally usher in a new age of enlightenment and a workplace where there are no bosses, there are no slave like performance standards and if you don't feel up to the job that day, you can take it off without fear of retaliation. A new constitution in which the pursuit of capital and it's related trail of human misery will be outlawed. Its replacement will be the equal division of all fruits of our labors. In fact much the way bush ignored katrina, so the people of kentucky have ben ignored by obama, 5 days and no sign of fema. So even a conservative state now knows the bitter truth. IF no money is to be made YOU will suffer because you are not an asset or tradable commodity. So play your little political games about an idiot senator all you want. I for one am glad my name isn't on the democratic or republican party membership rolls. The storm grows and soon it will crash down on those responsible for all the human misery.

C'mon Anonymous. Lighten up. There is no free lunch in America. your boss will never be easy or cute. Call Pres. Obama today and tell him you're shovel ready. J.C. Sr.