Expectations were, of course, that a bunch of radical wingnuts would get together and trash everything that stands even remotely in opposition to their nightmarish Vision for America. CPAC is the annual gathering of the Conservative Political Action Conference.

Media Matters has a collection of videos that will simultaneously amuse you while making your skin crawl. It's sort of like watching "Cloverfield", but with a laugh track.

And the results of their annual straw poll is just in: 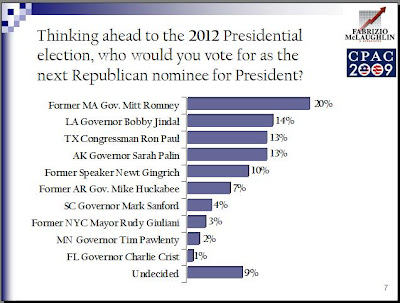 In the 2012 race, it looks like Mitt is the frontrunner, with Bobby Jindal a fairly close second. Sarah Palin is tied with Ron Paul, who had a reasonable showing despite the fact that he had some criticism of the GOP in recent weeks. 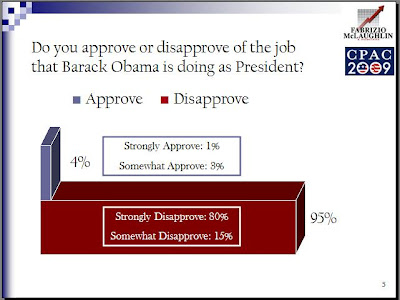 This one is a real shocker! Barack Obama had an astoundingly strong showing at the wingnut whinge-fest! Getting four percent from that crowd is the equivalent of George Washington being praised at a 1778 gathering in Windsor Castle.

Go over to Media Matters and check out some of the videos there. I especially find that the Rush Limbaugh videos provide the simultaneously ironic and nauseating thrills I enjoy so.
Posted by CT Bob at 3/01/2009 01:34:00 PM