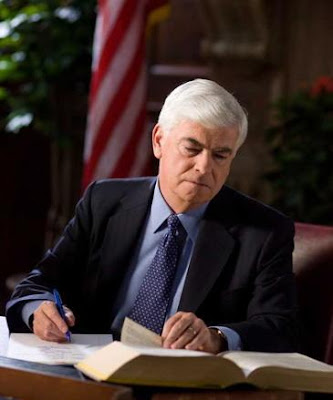 Sen. Chris Dodd hired veteran Democratic campaign manager Jay Howser to run Dodd's 2010 re-election bid this week. Dodd hasn't made any official announcement yet, and when he finally does, I can only hope that he doesn't appear on the Don Imus show this time around.

Dodd, currently targeted as the preferred mainstream media scapegoat for the AIG bonus mess, also has public relations problems resulting from his alleged sweetheart mortgage deal from Countrywide, and the simmering resentment from many Connecticut voters for his move to Iowa last year to run his ill-fated and quixotic campaign for the Presidency.

Recent poll numbers show some improvement over Dodd's recent virtual tie with GOP challenger former Congressman Rob Simmons, with the March 23rd-25th Daily Kos/Research 2000 Connecticut Poll placing Dodd just ahead of Simmons by a 45%-40% margin and outside of the 4% margin of error.

Gov. Jodi Rell continues her otherworldly favorable ratings with an inexplicable 71%. I can only assume she has a wizard from the Harry Potter books locked up somewhere in the governor's mansion dungeon, as her continued popularity defies any other rational explanation. 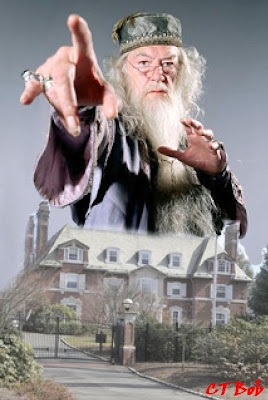 Take the two (very fav + fav) add them together and subtract the two columns of unfavorable; ignore the "no opinion" column as there's nothing else you can do with that; and you wind up with the net favorable (or unfavorable) rating.

Thus Simmons has a net-favorable advantage of over 3 times Dodd's and Caligiuri, barely known outside his district outpaces him too.

Note that using this methodolgy, Rell remains ahead of Obama.

There is no dungeon at the Governor's Residence; the wizard stays in one of the guest rooms upstairs.
Now that you know I'm sure you'll be a little more careful with the remarks regarding our Governor as it would be a shame if you turned into a toad or something.

Remember all that bad stuff that happened to John Rowland?

ACR, if spelling and grammar were a life-or-death issues on this blog, I would'a gotten the chair AGES ago! Don't sweat the little mistakes, esp. if the context makes it clear what you're saying.

This is the Internet: we don't need no perfection here!

Thanks for confirming my suspicions about Rell! I knew it had to have a magical explanation!

>>Thanks for confirming my suspicions about Rell!

Now that you've been forewarned, act accordingly - hate to see anything odd happen happen to you.

- The state has been in pretty good shape
- 'Do no damage'...Rell has passed the test.
- The legislature is screwed up
- The budget is screwed up
- The legislature controls the budget
- The Democrats control the Legislature
- The Governor is Republican...Checks and Balances...
- Fairfield Co., Republican stronghold and war chest extroadinaire, doesn't know where Hartford is or that it exists
- Hartford and Bridgeport don't vote
- Jody's too sweet to be bad, and every male politician is self centered and a potential crook