Mike Brown over at MilfordDemocrats.com posted this article with a nifty chart that clearly displays how the Milford City Budget has experienced many years of unchecked budget increases until the Democrats won a majority on the Board of Aldermen.

The reign of the "rubber stamp board" has finally come to an end, but that didn't stop Mayor Richetelli from trying to submit a budget that he claimed he couldn't cut because it "includes the core, essential needs of the city and reflects their realistic cost."

The Mayor's speechifying aside; the numbers are speaking for themselves. Mayor Richetelli has proposed an average 4.6% annual increase in spending during his tenure. This year's 5.7% proposed increase (City Side) is just icing on the distasteful cake.

This spending frenzy had not been kept in check until last year; when the Democrats took control of the Board of Aldermen. Here are the facts. 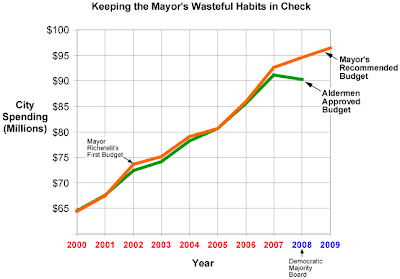 Since his first budget proposal in 2002, Mayor Richetelli has requested increases in spending that should have made the "fiscally responsible" Republicans blush. Unfortunately, all Republican controlled Board's of Aldermen rubber stamped his proposals. Thankfully, the Democrats took control of the board in during the election of November 2007 and literally reversed this trend by rejecting the mayor's spending requests. Count on the Democratic majority on the Board of Aldermen for more real fiscal responsibility this year.

Fiscal resposibility from democrats, send these guys to Hartford.

After they fix Milford's budget, I'm sure they'll be happy take a shot at it.

Rather they try a REAL problem...here in West Haven!