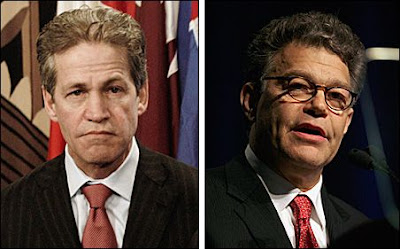 Final arguments in the Franken-Coleman recount trial were heard yesterday. The contest for Senate from Minnesota has been tied up in court since former Sen. Norm Coleman decided to dispute the results of the mandatory recount which gave challenger Al Franken a 226-vote lead out of 2.8 million votes cast.

Not surprisingly, the court is adhering to the state laws regarding election recounts and tossing out quite a few of Coleman's challenges. Minnesota has very good election laws; they were cited by the Supreme Court during the 2000 Florida presidential recount. Sadly, Florida's election laws were sorely lacking in the necessary jurisprudence to protect the practical application of democracy, and we all remember how that turned out.

There's even charges of computer hacking in the Minnesota trial. Phoenix Woman at FDL has been doing a great job with regular updates on the recount:

Franken got to call his last witness yesterday, and tie up a few loose ends. Coleman got to squirm as a growing number of news outlets and computer experts called into question his claims of outside hacking and his campaign's data-handling practices as the news of his storing unsecured credit-card data from his donors became known. (Ironically, if Coleman's people had still followed their old policy with regard to credit-card data, there wouldn't have been any problems.)

Closing arguments are happening today (Friday), and next week will be the reviewing, opening and possibly counting of the rejected absentee ballots that both sides have reintroduced into the recount -- which, if it proceeds in a timely fashion, will result in the Election Contest Court's making a ruling by this time next week, after which Norm will probably appeal said ruling to the Minnesota Supreme Court.

Coleman will have an awful time raising money for the appeal, and MN law states that losers in election challenges are liable for all costs associated with defending a challenge, so the Franken campaign can insist that Coleman put the estimated amount of the appeal into escrow before the appeal is heard. If Coleman, who is widely rumored to be having a lot of difficulty raising any more money (especially considering his credit card information handling practices) can't find the dough, the court may turn down his appeal and finally award the seat to Al Franken.

Oh, and the lawyers from the credit card banks would like to have a work with Norm after all this is over. Apparently Norm's campaign violated like a million regulations with the way they incompetently stored their donor's personal credit data, and they're getting all lawyered up for the next dance with Norm.
Posted by CT Bob at 3/14/2009 06:36:00 AM

Just last Friday I donated a few bucks to Coleman - by credit card.

Seriously? I thought they lost their credit card processing abilities when the bank found out about their shoddy data practices.