Early voting in CT is one step closer 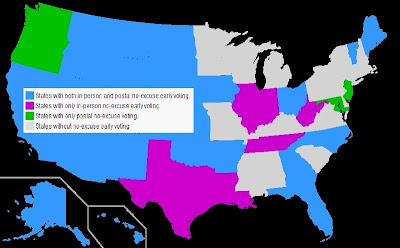 From a press release by the Secretary of State's Office:

Hartford: Connecticut Secretary of the State Susan Bysiewicz today praised the General Assembly’s Government, Administration and Elections Committee for approving Senate Joint Resolution No. 43 whose ultimate goal is to make Absentee Ballots available to any registered voter. The Committee’s 14-1 vote sends the resolution onto a vote by the full General Assembly.

“Millions of voters nationwide successfully cast ballots before Election Day in 2008 using early voting,” said Secretary Bysiewicz. “This had the dual effect of increasing voter turnout to record levels nationwide while at the same time reducing long lines at the polls and the strain on poll workers on Election Day. No excuse absentee balloting would be a secure and cost-effective way to give Connecticut voters the opportunity to vote early and at their own convenience. This system would also allow early voting without imposing the significant cost of setting up early polling stations or compromising the security of our elections. I commend lawmakers of both parties for taking this prudent first step towards early voting in Connecticut, and I urge full passage by the General Assembly.”

If approved by a three-quarters majority in both the State House and Senate, the resolution would put a Constitutional question on the ballot for voters to consider in 2010. If that Constitutional question is passed, the legislature would be empowered to remove the requirements of physical absence, disability or sickness that currently restrict who can use Absentee Ballots on Election Day.

The upside of early voting is that it will give more people the opportunity to vote, who might otherwise be busy or unable to get to the polls on the usual Tuesday election day.

I've always thought that scheduling elections on a work day was a bad idea. People often are too busy or tired to be bothered to vote on a work day, and polling places can get very crowded in the pre- or post-work rush hours, resulting in voters simply leaving rather than waiting in line to vote.

Early voting via absentee ballot is allowed in 31 states, so it obviously works well enough. Although in Minnesota, Norm Coleman is challenging pretty much every last one of them in a desperate attempt to hang on to his seat when it's only a matter of time before they agree that Al Franken rightfully won the election. But a margin as narrow as that one deserves a detailed recount.
Posted by CT Bob at 3/06/2009 05:14:00 PM

Early voting? Who cares? what is important is Hugo Chavez has today extended an offer to Obama to join the great socialist revolution! Glorious! To all who have said it was impossible, guess what? IT IS HAPPENING! The murderous rapine capitalistic monster known as the us is soon to be tossed on the scrap heap of history. The long awaited victory by the labor class is upon us. We should all pick up hugo's cause as are own and petition obama to join with us as we overthrow the scum wealth holders and create a true democracy in which ALL are EQUAL wealth wise.

Is your name Maple Syrup?

It should be, you sap.

Early voting is a godsend. In my particular polling place, turnout is usually quite low... so I can generally pop in before work on the magic Tuesday. However, in the last presidential election, it was awesome to be able to get in and vote when it was convenient. I can't imagine if everyone had to vote on Nov 4 (it was the 4th this time, wasn't it?)... I can't remember what I had for lunch.
Hope you guys get it!

1) Many voters who vote by Absentee Ballot are disenfranchised. Something like 12,000 were thrown out by voter error in Minnesota, only 10% of those were reinstated, so most of the rest thought they voted but made an innocent mistake and there vote did not count. Connecticut disqualifies at about half the rate of Minnesota, but that still is a lot of voters and the number might double with no excuse absentee voting.

Also consider that mail-in voting has other risks. The applications and votes go through the mails several times, are handled by the post office, contractors, and are held somewhere in town hall for days and weeks before the election. Just last week we had the story of 700+ checks not making it to CL&P...the same thing could happen to votes.

2) Yes, voters deserve the same kind of accurate recount done in Minnesota. We do not have that in Connecticut - we recount by machine, that might have saved Minnesota 1 day in the 45 days or so process between the start of the recount and the declaration of the winner by the state.

3) Its true that voters like no excuse absentee voting and quick recounts...but it does not mean they are good for voters or democracy. We also like fast foods loaded with fat, but that does not mean its good for us.

As an election official, I view early voting with mixed emotions. My concerns about it mainly focus on the implementation.

On the other hand, many already use our current AB process for de facto early voting.

BTW - In CT, our recounts now are exactly like that in MN...

Having gone through three recounts since we adopted optical scan tabulators, I've become a fan of the new system - and the recount procedure set up bt SOTS.

Yes, as long as the audits are equally well performed.

(Its been a long time, but I noticed your comments and I want to correct the record)

In Minnesota multiple observers and officials carefully review every ballot, then count them by hand.

In CT its a much less check and balance type of process and most ballots recounted by machine.

Originally the SOTS required a hand recount. In early 2008, she backed off that and subsequently created the current procedures.