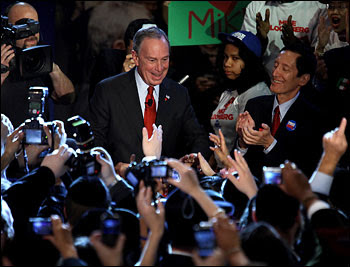 This is something of an interesting result. In the Republican-leaning 23rd District of New York, Democratic candidate Bill Owens defeated Doug Hoffman. This is a seat the national GOP was counting on winning, and had been occupied by a Republican for over 100 years.

In a night of largely awful news for Democrats in state and local elections, this is one hopeful sign that not everything is going against us.

The post-mortum of the large Republican gains in many areas may reveal what caused such a drastic reversal. Here in Milford, I'm still wondering what precipitated the GOP across-the-board victories. It would be different if the Democratic majorities on the boards raised taxes or approved some onerous legislation, but they didn't.

Yet, the local GOP took a huge portion of the unaffiliated voters and turned it into a massive landslide. This is way more than issues, or even GOTV. If you look solely at the issues and voted accordingly, we would have won big. Nothing going on locally can explain the magnitude of the loss. I've said it before, but there seems to be some kind of huge backlash going on against the Democrats.

I was way off in my predictions on thsi election. I thought things would be much closer and certainly didn't expect the bloodbath that occurred.

I expected Spalthoff to have more of an impact and to siphon off some of Richetelli's support. But, as it turned out, the independents performed even worse than the Democrats.

The scariest thing about this is the Board of Education results. I have two kids in the Milford Public School system and I expect the quality of their education to deteriorate significantly under this new board. They are going to squeeze every last dollar out of the schools in an attempt to "lower taxes." There were many well-qualified people who went by the wayside in this election in favor of a slate of Republicans who didn't even campaign. I don't get it.

These results are so skewed it makes me think there must have been some foul play somewhere down the line.

In a way ny-23 was a win for those who want a moderated republican party. For a week palin,and others of the far right have been bragging about how they pushed hoffman up. His loss in a conservative district has to be seen as a sign that their extremism is not widely popular. Mr. Owens is a moderate to conservative democrat who is much more in tune with the majority of ny-23 voters. Ironically he will soon enough be villified by the dem left as being a hated blue dog and quite possibly targeted by the left in 2010 as some other blue dogs are. I think both parties have to take one main point from tuesday, being that the middle whether a little left or right want leaders who aren't idealogues. Extremists of both wings should be put on notice that the majority of the electorate is tired of the hate and incompetence posing as leadership.

Yeah, here we go, the evil republicans stole the election in Milford. Give me a break. Same garbage over and over one of the parties loses and they cry foul. Good God Washington was so right when he warned of the dangers of political factions.

No, I don't believe there was any treachery at work here. We just got walloped, plain and simple. We need to own it, and then start working on how we're going to come back in 2010. And locally, 2011.

Perhaps both Washington DC and Hartford have not listened to the citizens. Stop Spending

You mean, like in Milford, where the Democrats pushed the FIRST TAX DECREASE in city history? Yeah, that really paid off well!

At least next year, when we get that GIANT TAX INCREASE, you guys won't be able to blame us.

Enjoy that. You'll only have the Republicans to blame.

Didnt know much about G Salvatore even though
I attended 'debates' and a forum or two.

She seemed pretty scripted and didn't come across well.

What I thought was a good sozed factor was the
oft- repeated mantra about not using Mayor Richetelli's
drug episode against him, while bringing it up as often
as possible in stating that they would not bring it up.
Even at the end on Monday I receoved a postcard from GS say ing that his absence during that time was critical and asking what he had to hide by not disclosing all facts.

Look - you have a popular mayor who is almost daily being berated for an incident that falls under the category of 'there but for the grace of God...'. People in Milford reject that type of attack.

One other note - after the polls closed in her kind-of concession speech, GS appeared to take it far too personally. She was angry and almost vulgar, with little congratulatory grace. Her platitude on local cable about having run for Mayor simply because she 'cares sooo much about Milford' seemed empty. She went from one party to another in an obviously ambitious and self-centric quest to be mayor and was throttled. Seems like the candidate shot herself in the foot for all futures being so venal. Here's a thought - why don't we recruit our own quality people with a good image and integrity instead of the other part's deserters hell bent on a naked power grab.
No guarantee it would work but it couldn't hurt. And while we're at it ley's get a TC who touts the positive aspects of our party and candidates, instead of one whose strategy is snarky personal gotcha moments. I'm just sayin' , it's a start.
P.S. Sorry for the typos - I mislaid my glasses.

Well, as I said before, the GOP victory seems to have MUCH more to do with what's going on nationally than with the local candidate's personalities.

Genevieve isn't a career politician, so of course she's not going to sound as polished as Mayor Jim. She's wasn't conciliatory enough for you? I dunno, but it was very classy of her to go over to GOP HQ and personally congratulate the mayor. Maybe that didn't make it onto TV, but she did do it and it shows quality of character.

The postcard that in part addressed Jim's unexplained absence was a direct quote from the NH Register. Very little mention of Jim's personal problem was raised by us, except to point out that simply disappearing, and then LYING about it for several days, is a clear abdication of duties REGARDLESS of the reasons. This wasn't about Jim's drug problem, it was about accountability and responsibility to the City!

Believe me, there are a LOT of interesting stories going around we chose not to discuss. If anything, the local Democrats took the high road in this race and ran a very clean campaign, especially compared to the "Dems Copped Out" silliness trumpeted by the local GOP. As if a single cop will make the difference between safety and total anarchy. Of course, there are STILL two positions that HAVEN'T been filled for many months. Yet, THIS one slot is the cause of all our problems! Everyone wanted tax relief, so the Dems supplied it, and they all got voted out for it! It's insanity! Talk about cutting off your nose to spite your face.

Remember, there are Republicans who NEVER left their house to campaign, and they STILL won! This race wasn't about personalities, experience, or the issues. Something else is going on here.