An informal chat with Ned Lamont

Last night several bloggers met with Ned Lamont for a friendly chat about the current state of the political situation in Connecticut. Ned recently announced the formation of an exploratory committee for a possible run for governor in 2010.

There will likely be a low-dollar (my favorite kind!) fundraising event held in New Haven, probably at "Bar" (254 Crown St) on December 10th. As soon as I know definitely, I'll post it here; or you can bookmark NedLamont.com and check it for details. It's a great chance to meet Ned personally and hear about his vision for our state. 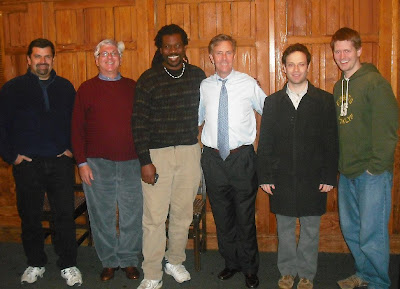 (L to R: Me, Jon Kantrowitz, CT Blogger, Ned Lamont, Charles Monaco, Spazeboy)
Overall the feeling was very positive and it looks like we're in for another wild ride next year in the Nutmeg State. There was definitely a bit of an undercurrent reminiscent of that immortal line from the Blues Brothers movie:

“We’re putting the band back together!”

But I don't think we'll need to create a "KISS float" again. In 2006, Ned ran against Joe Lieberman and his toxic policies.

This time around, Ned will be running FOR exceptional leadership of our state, which (as the recent budget negotiation crisis indicated) has obviously been sorely lacking for the many years of the Rowland-Rell administrations.

Oh, and speaking of the "Blues Brothers", I found this old photo in my archives from way back in September 1979, when I was in Chicago for a week and they were filming the movie all over town. Belushi and Ackroyd were in the police cruiser shooting one of their many driving scenes. I also got photos of one of the famous cop car crash scenes during the big final chase. 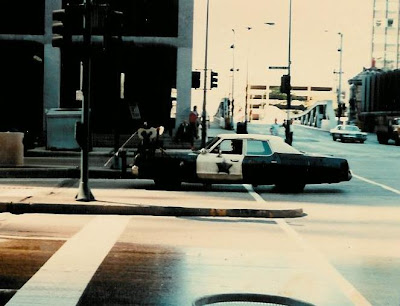 SAziz is busy with her baby.

CT News Junkie is our best hope for Hartford coverage.

I am only good for helping CT Bob carry gear. Besides, I am in California now. Contemplating a move back. Only problem is the distance to Sacramento from everywhere.