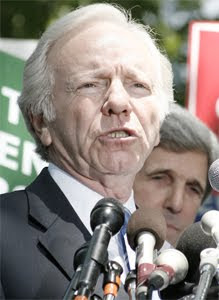 Many bloggers seem to be picking up on Sen. Joe Lieberman's obsessive anti-Democrat attitude. People are starting to question whether the senator is truly representing what his constituents believe, or if he's simply engaging in political payback for the endless professional disappointments he's experienced over the last five or six years.

I wrote somewhat jokingly that Lieberman was suffering from a persecution complex. I say "jokingly," because I'm not exactly sure where the legal definition of "libel" stands in regard to a public person, but I'm fairly confident I haven't burned that bridge just yet!

From an article by Peter Beinart discussing Joe's swing to the right in The Daily Beast:

So why is he doing this? Because he’s bitter. According to former staffers and associates, he was upset by his dismal showing in the 2004 Democratic presidential primary. And he was enraged by the tepid support he got from many party leaders in 2006, when he lost the Democratic primary to an anti-war activist and won reelection as an independent.

Gradually, this personal alienation has eaten away at his liberal domestic views. His staff has grown markedly more conservative in recent years, and his closest friends in Congress are now Republicans John McCain and Lindsey Graham. For Lieberman, the personal has become political, and it has pushed him further to the right.

"Bitter", "upset" and "enraged" aren't words normally associated with an elected representative. Unless, of course, you're talking about a very angry man. And that anger has indeed pushed the "personal" to become "political".

This isn't about what you or me wants. Joe Lieberman couldn't possibly care less about either of us or his constituents in general. This is strictly the politics of rage we're talking about, the politics of payback.

I can't help but think about how badly it must have stung the senator's fragile ego last year when McCain chose that dingbat from Alaska over him as his Veep candidate. Lieberman did everything humanly possible to suck up to the GOP, and his reward was a viscous kick to the ass and an inchoate promise to make him something like Secretary of Defense should McCain have won.

The way things turned out for Lieberman fills me with an inhumane amount of schadenfreude, which I'll admit is shameful. I can't help it; I'm weak, and subject to bouts of chastisement rather than forgiveness when it comes to politicians.

However, the long-expected Democratic backlash against the senator never materialized, and Joe Lieberman somehow escaped the comeuppance he so rightly earned. I can't help but think how the Republicans would have acted when faced with a betrayal of Lieberman's magnitude. Alas, nobody will ever give Harry Reid a nickname like "The Hammer".

Anyway, two things remain certain. We'll absolutely have Joe Lieberman to kick around for a few more years; and more and more people are catching on to the senator's game of political payback. If Lieberman remains instrumental in the GOP efforts to defeat health care reform, I can only hope that Harry Reid finally wakes up and starts acting like a leader.
Posted by CT Bob at 11/25/2009 03:54:00 PM

Hiding Behind The Name Anonymous said...

"I wrote somewhat jokingly that Lieberman was suffering from a persecution complex. I say "jokingly," because I'm not exactly sure where the legal definition of "libel" stands in regard to a public person, but I'm fairly confident I haven't burned that bridge just yet!"

Now I never went to Law School, so perhaps Ken K could verify this, but I think that if you want to state something edgy like that, if you structure it as a question then you're covered, such as:

"Considering the bizarre statements, could the politician some call little droopy be suffering form a persecution complex?"

Ah, it has to be in the form of a question! Sort of like "Jeopardy"! Now it makes perfect sense!

The Jeopardy answer is: "Joe Lieberman!"

And the correct question is: "Who is the paranoid senator that acts out against the Democrats because of his massive out of control persecution complex?"

But don't eat ALL the turkey...we'll have nothing to blog about.

Remember that in the 2000 Presidential election, Lieberman ran for both the Vice-Presidency and the Senate.
He would not give up his personal Senate seat even to run for higher office. At that time, he did not even need to campaign to be reelected. What a shock 2006 must have been.
If he had been elected VP, Republican Governor John Rowland would have appointed the next US Senator from Connecticut. Joe has not been loyal to anyone but himself for some time.
oldswede

Wow, what a great post! I liked your comparison of Harry Reid with Tom Delay. And, nice photo, reminds me of Gollum.

LZ, yeah gutless Reid is the complete opposite of the ruthless DeLay. I detest the spinelessness of many Democrats.

Oldswede, boy do I remember 2000! It pissed me off so much that Lieberman was willing to let a Senate seat fall into GOP hands simply to hedge his bet that I voted for a Republican for the only time in my life. Maybe if he didn't have his Senate seat waiting for him he might have fought harder to keep the Florida recount going.

I voted for Gore/Lieberman for P and VP, and for the later convicted child molester for Senate! I didn't know at the time you could simply NOT vote for a particular office, so I voted for Giordano as a purely symbolic protest.

But it is kind of nice to know the only Republican I ever voted for is a real piece of shit who's sitting in prison right now.

I'm a bit late to this conversation, but his stance on the Healthcare Bill leaves me stunned. Why else would he backtrack on issues he once supported? He's got no chance for re-election, and he knows it. Unless he thinks he's still viable as VP, for the Republicans. Again - not viable. He's burning his bridges.