Does anyone else find the Q-poll's incessant use of the phonetic spelling of their name in their press releases somewhat irritating and condescending? We all know how it's pronounced! Sheesh!

Well, here at KON-et-i-kut BAHB, we would never stoop to that level of disrespect! (didja see what I did there?) 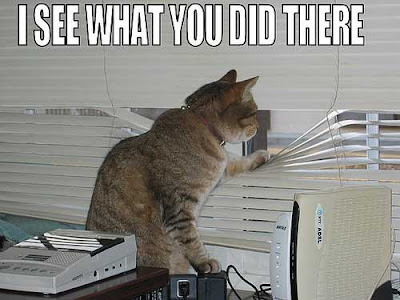 Anyway, here it is nearly a year out from the 2010 election, and Republicans statewide are already breaking out the Moet and caviar. They're seemingly convinced that their knight in slightly rusted armor, Rob Simmons, is going to save the day for them.

Just calm yourselves down, boys and girls. It's way early, and the poll reflects less of an endorsement of Simmons than simple dissatisfaction with their perception of the job Sen. Chris Dodd (and Congress in general) is doing. Their head-to-head numbers are 49-38%. Which isn't great for Dodd, but there's still a couple unresolved issues at hand that will likely change things over the next year. 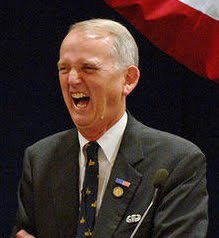 Simmons (pictured above; horrendously) against Dodd, even with this terrible economy and current outlook of uncertainty, still can't manage to pull 50%. In fact, in an all-out Republican primary, Simmons is mired at merely 28% against the field, which is lukewarm approval indeed! People aren't likely to begin pouring their money into a campaign that doesn't carry a 1-in-3 voter support of even winning the nomination.

The voters of blue Connecticut simply won't overwhelmingly support an insignificant little ex-Congressman who enthusiastically carried water for the worst president since Nixon. Maybe Linda McMahon will become the great GOP hope. With her unlimited wealth, if she can successfully distance herself from the WWE's tawdry image, Dodd may have a very tough fight ahead. 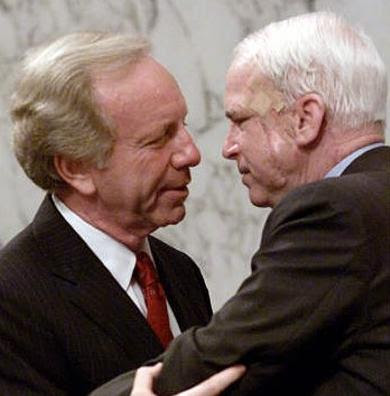 The numbers on Sen. Joe Lieberman are interesting. He rates a 74% approval rating from Republicans! Seventy-four percent! Boy, the GOP loves them some Joe! Hey Harry Reid, I bet that decision to keep him in the caucus is really paying off big these days, right? Boy, I don't know WHAT we'd do without Joe around!

Overall, no major surprises in this poll. While the news isn't great, it certainly could have been worse. We're far from crunch time, but Sen. Dodd and the Democrats do need to be concerned with the public perception (accurate or not) that they need to do more to solve our very immediate problems right now.

Those are some pretty rose-colored glasses Bob -and to mix metaphors completely - the glass isn't half full - it's almost empty - Dodd's in big trouble, and all the great things he's doing now aren't helping, except among us diehards, who also have to stomach his Joe Lieberman-love.

The pronunciation thing is for broadcasters who are a dim-witted lot and DO need constant reminders.

Hey, I ain't ready to launch the life boats just yet. Q-poll numbers aren't the end-all when it comes to predicting the future; they're just a snapshot of current opinion. There's still time for Dodd and the Dems to get their act together, especially considering the fragmented CT GOP field.

Agree that broadcasters aren't necessarily a gaggle of luminaries, but I was just making a little joke.

The only people that would actually go to the source to read the polls and press releases from them have got to have a pretty good idea how the heck to say it. Yeah, it was a jab at they-R stew-pid.

Since his post here this morning, Jonathan Kantrowitz has revised his thinking about the poll, saying "The numbers . . . do not necessarily hold up under closer scrutiny." I waited to see if he would post here again, but nothing yet.
Here's a link to his latest -
http://blog.ctnews.com/kantrowitz/2009/11/12/q-poll%25E2%2580%2599s-funny-numbers/
oldswede

Yes, there's a lot of talk suddenly about how the numbers are very very strange. The CT Democrats sent out an email today with their concerns about the poll results, and it's getting a lot of play locally. I think Dougie is gonna have some 'splainin' to do.

Yeah, Dougie's credibility is eroding.
His Republican political preferences are known and recent actions will make his data suspect.
Plus, his involvement with early leaks of polling data to Moody-Rell is not going to be good for his or QU's reputations. The school has used the polling to get national name recognition. This will hurt.
Say goodnight, Dougie.
oldswede

I don't get it. Explain?

"the glass isn't half full - it's almost empty".

Dodd is done. It's over.

(By the way, I'm forced to use the on-screen keyboard, as I'm waiting for a new kb for my laptop, and my desktops are all off-line...)