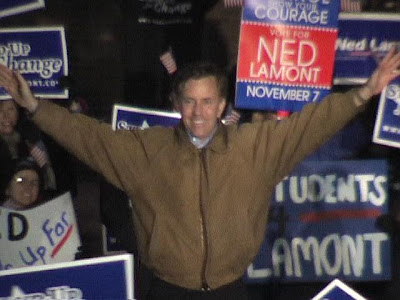 Paul Bass has the news at The New Haven Independent.

Norwalk, CT - Ned Lamont, successful businessman, co-founder of the state policy center at Central Connecticut State University, and Democratic nominee for US Senate in 2006, announced that he will be filing papers today with the State Elections Enforcement Commission establishing an Exploratory Committee for statewide office:

"As I have continued to meet with citizens across our state over the last three years, as co-chairman of President Obama's Connecticut campaign and on behalf of health care reform, I have been constantly reminded that Connecticut is not living up to its potential and that too many of our families are being left behind," said Lamont.

"Like businesses, states thrive with strong executive leadership, and they fall behind with weak leadership. As measured by the loss of jobs, young people leaving our state, and the never-ending budget crisis, Connecticut's Chief Executive is simply not getting the job done."

Since the 2006 campaign, Lamont has continued to serve as Chairman of the Board of Campus Televideo, a Connecticut company he founded twenty-five years ago. He is also a distinguished professor of political science at Central Connecticut State University, where he co-founded a policy center which has brought together leading business, labor, and non-profit leaders to formulate a strategic plan for the state of Connecticut. In addition, he serves on the boards of Conservation Services Group, a leading provider of energy efficiency programs, Teach for America/CT, and Mercy Corps, an international non-profit organization that focuses on job training and small business start-ups around the world.

As to CT's problems Lamont is right on. As to the blame, sorry but the legislature, the VETO PROOF legislature is the reason for CT's troubles. Rell is nothing but the legislature's scapegoat and can do very little by herself. If a democrat does win the governership next year, who will they blame then? But I guess if the economy does continue to implode, job losses continue to climb (great job btw passing a job killer budget) in CT a lot of the current legislature won't be around for the next budget fiasco, as many of them will be made unemployed by the voters.

I honestly am having difficulty processing this information today. I love Ned and I think he'd make a superb governor.

But right now, I feel like a dazed Hiroshima survivor wandering around in the ruins. We got demolished last night, and I think there is a lot of reassessment that needs to be done re: the Democrats.

I sure could have used a day or two buffer before hearing this news. I'm having difficulty figuring how this will work in the larger picture.

It's refreshing to have a thoughtful, not-for-life politician's voice in the debate.

Seems to me that Ned Lamont is trying to get his name out there before JoRell announces, especially if she doesn't run. The media would then go nuts over how all this is good for Republicans and ignore the Democrats.
Bob, I think that those of us who are information junkies dangerously underestimate how little the average citizens know about their local governments.
As newspapers lose readers and drop local reporting and as the TV newsreaders become the only sources, consider what they could possibly know. How much time do the smaller town governments get in coverage on the six o'clock local news? Usually zip. Local radio? A joke.
That's a big part of the challenge - to get voters to pay attention. And to remember what they hear correctly. There's new research coming out on the psychology of memory and the brain and how very unreliable it is. I've read examples of how the brain easily flips the status of a recalled fact from false to true, unconsciously. Lots to read out there.
oldswede

You might be right. I was thinking that Ned announced early to maybe help an on-the-fence Rell decide that maybe she doesn't have the gumption for a real fight.

We lost big time in Trumbull to a Republican - Tim Herbst - just based on something Ray Baldwin said about a tax increase, which he immediately retracted.

Bob, forget this reflective thing - pfff - you're in a hibernation state waiting for the Kiss Float to run over you and wake you up, or a chance for Hollywood Bob to star in another movie.

I saw Jon's article. We'll see how it pans out when Jodi announces her intentions. I think that's when we'll get a good idea of the lay of the political landscape here.

And really, do you honestly expect someone as reactionary as ME to pull off that "reflective" act for very long?