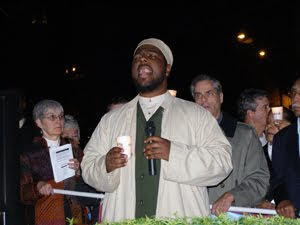 Christine Stuart from CT News Junkie has the detailed story and video from the event. I found it interesting that Sen. Lieberman's outspoken opposition to providing a way for people to afford health care brought Jews and Muslims together.

Lieberman, a famously Orthodox Jew, would possibly find the words of a local Rabbi especially pertinent:

“You shall not stand idly by the blood of your neighbors,” Rabbi Stephen Fuchs said quoting scripture. “It is with a heavy heart that I proclaim to you Senator Lieberman that that is exactly what you seem to be doing at this time.”

Chaplain Bilal Ansari of Muhammad Islamic Center of Greater Hartford was also in attendance and spoke in support of the legislation.

There was no indication that the senator was even home during the vigil, but the organizers agree that the symbolism of the event is what mattered.

UPDATE: I can't believe I made such a mistake in the title of this article. What's a "pray vigil"? Of course I meant "prayer". I'm a dope.

(now don't all rush into comments to agree!)

Here's a quick tparty video showing the long line of people marching with candles. It's quite a moving sight:

That's me in a side view with a candle near my nose. It was a privilege to be there. Keep fighting for the public option.

Thank you for supporting this important legislation, Victor.

What happened to the concept that a mans home is his castle?

Protest outside his field offices, not his home.

When a crowd shows up outside someone's home they should be there to draft the individual for office; not to intimidate them someplace where they should be entitled to be left alone in peace and quiet.

As I've mentioned before, I'm not a big fan of that sort of thing either. But in this case, Sen. Lieberman has purposefully avoided discussing the issue with his constituents.

ALL other members of Connecticut's Congressional delegation, including Sen. Dodd, has braved the "rabble" to hear from people about what they want for health care. I've been to the town hall meetings, and it takes quite a bit of fortitude on the part of the representative.

However, Sen. Lieberman prefers the safety and non-challenging forum of FoxNews in which to issue his threats.

If we're comparing who has less class, an inter-faith vigil of VERY peaceful protesters, or a professional coward who hides from the very people he supposedly represents, I think even you can come to the obvious conclusion.

I will admit, that considering the strength of his argument, I'm surprised he doesn't take them head on.

With no curtailment of a run amuck FDA which forces our drug prices higher while offering nothing else for the tax dollars they absorb.

No tort reform to protect all of us from those that view grampas illness or death as a lottery victory.

Plus not even any discussion of a national catastrophic care package which could protect every American's home for under 1000 per family a year - how can anyone take this whole thing seriously?

I've always been pro-choice, but this is one abortion I'd like to see stopped.

ACR -
Are these talking points from the non-existent Republican Health Reform hoax? If Joe cared about these issues, why is he blocking debate?
He is so transparently venal, in the pockets of the insurance companies and the other special interests that keep his political life-support system going.
More than personal wealth, Joe craves power and attention. Without that, he wouldn't be able to sustain his ugly soul-less egomania, and he would wither away.
oldswede

>>...cared about these issues, why is he blocking debate?

We don't have enough votes to get something on the floor and you know it.

However with Lieberman's help, we can block.

ACR, I agree that much more needs to be done to "fix" healthcare. But we really should get this passed as a first step, and then work on legislation to address those other issues.

Like you, I'm not happy with the current state of the FDA (if they approved a different way that is currently available to produce vaccine, we'd all have our H1N1 shots by now) nor the way tort judgments have seemingly no rhyme or reason.

But if we don't get this through, I fear we'll never get ANY reform done!

When did Dodd hold an open meeting with Ct citizens?

Two I remember off the top of my head:

Bob Your last sentence says it all. It may not be perfect but its a start! If not, we won't see it again in our lifetime. Also CT needs new blood. Dodd is a career politician, Lieberman tries to vote his conscience, but is it now just political? Shit most of them cover their asses with BS We need longer terms Congress with term limits for all. Too much time spent campaigning! Gimme 6yrs work for 6 yrs pay and say goodbye!