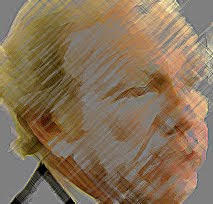 Sen. Shameless Opportunist (thanks FDL) is going for headlines once again, probably on the orders of his conservative overlords, by launching an investigation into the "terrorist act" committed by an obviously insane Army psychiatrist at Fort Hood last week.

...there were "strong warning signs" that the alleged gunman, Maj. Nidal Malik Hasan, was an "Islamist extremist."

"If that is true, the murder of these 13 people was a terrorist act and, in fact, it was the most destructive terrorist act to be committed on American soil since 9/11," Lieberman told "Fox News Sunday." (emphasis mine)

Sen. Lieberman is becoming Connecticut's version of Rudolf Giuiliani: "All terror, all the time!". He certainly doesn't want anyone to forget for a minute that all Muslims are potential terrorists, and any infraction by someone who prays to Allah will be immediately classified as a "terrorist act".

It's no coincidence that Lieberman waited until the morning after the late night passage of the historic landmark health care reform bill to announce his "investigation", even though he had several days to do so. It's an investigation which, if we know Joe, will go absolutely nowhere once the headlines die down.

Army Chief of Staff Gen. George Casey urged the public not to rush to conclusions about Maj. Hasan's motives with an investigation underway. Sen. Lieberman seems to be operating under no such compunctions.

It's wonderful to know the chairman of the Senate Committee on Homeland Security and Governmental Affairs is working so hard to protect us from make-believe terrorists, and yet we can't get swine flu shots until people start dropping dead in the streets.
Posted by CT Bob at 11/08/2009 03:16:00 PM

I dunno if author Lori Price is at all familiar with semi-automatic handguns, but in the hands of a competent marksman (like many trained military personnel) it's quite easy to empty multiple 10 to 16 shot clips within a matter of seconds. If Hasan had four minutes for his rampage, as the media reports, he could have managed to fire 10 times that amount.

Whenever an argument misuses a phrase like "logic dictates", it pretty much loses any credibility.

"Major Hasan's neighbors, medical trainers, colleagues, friends, cousin, uncle-- even the store owner to where he bought his food -- all heap praise on Major Hasan's temperament. This appears to be psy-ops, six ways to Sunday.

Sure Lori, because a friggin' psychiatrist wouldn't have the first idea how to fake being "normal". The guy was Hannibel Lector-style insane.

Hey, did you hear about the dyslexic truther? He claims 1/91 was a conspiracy! LOL!

So the 9/11 Hijackers were also "obviously insane", eh?

Never underestimate LIEberman's ability to make political hay out of tragedy. It's just more disgusting evidence of his pathological need to be front and center of any newsworthy event.

Shmifke, I never said that there WASN'T a conspiracy in the 9.11 attacks. Of course there was! And it was proven not by lame conjecture proposed by internet pseudo-experts, but by overwhelming, verifiable evidence.

Unless solid evidence comes to light regarding the tragic massacre, I'm not going to jump to conclusions simply to fit any particular agenda.

I'm a curious Washingtonian - State of WA. Is Lieberman in any trouble at all in CT? I mean, what don't you all recall or impeach him or whatever you have to do to throw his ass out?

He's almost like a character out of the Sunday comics. He's ridiculous.

Joanie - my aunt lives in Seattle; I visited there 10 years ago. One of my favorite cities.

The Constitution doesn't allow states to recall senators; only the Senate can impeach and remove their colleagues. And I think in all of our nation's history, only two senators have been impeached, and I'm not sure if ANY have been removed.

In other words, you pretty much need to be caught with a dead hooker in your trunk before they'll throw you out of THAT club.

But Harry Reid does have the option to push for the Senate Democrats to strip Joe of his precious chairmanship of the HSC. That's pretty much the only threat they can hold over him, and nearly the same caveat applies before they'll make good on it.

Do the people of Connecticut still support him? The independents and Republicans? I guess I'm wondering if he's got much support from his electorate? Or have his numbers waned significantly?

If so, why he doesn't seem to notice.

No, he has terrible numbers among the Democrats and unaffiliated voters, and reasonable numbers from the Republicans. But every poll taken since 2008 shows him losing to any Democrat.

I don't think Lieberman cares at this point. He's using his power to punish the Democratic voters of Connecticut for embarrassing him in 2006, and he's bitter that he didn't get a chance to run for VP last year because McCain picked that dingbat from Alaska.

He'll probably continue to obstruct Democratic policies until he gets stripped of his chairmanship, which knowing our weak-willed Democratic leadership, will probably never happen. And in 2012 he'll retire and parachute into an incredibly high-paying lobbying job.

Or he'll get appointed to some high-ranking post in appreciation for his many years of GOP water carrying by a Republican president if Obama loses.

BTW, that's a great picture of the little putz. Did you create that?

I see your point about the number of shots, but something makes me wonder if what happened is not like what they're saying. If it was a group of soldiers that started fragging rather than be deployed into the Occupations, you can be certain that they'd do whatever they could to keep a lid on it. That's one of the reasons we "declared victory" and then high-tailed it out of Vietnam. And one of the reasons we don't have a draft, ...yet.

And so joe will have his "inquiry", which you so aptly predicted the result of in your story. I would be willing to bet that Mr. Hasan will never get to talk, if he ever comes off the ventilator.

That's right lakezoarian, keep dishonoring the dead, wounded and surviving army troops who were there. They have honor and sense of duty, you have neither. They risk their lives, you type trash. Loser.

Investigations do need to be held. The picture emerging of this guy is that of a radical Muslim extremist. Just a few minutes ago news broke that he had electronic communicatons with terrorist suspects overseas. We know he belonged to a radical inman's mosque in Virginia. Two 9/11 killers belonged to the mosque at the same time and the inman now lives overseas. There have been many other clues about him that if true all but clinch the fact that he is an Islamic radical terrorist. Sometimes a duck is a duck. Just because it's Lieberman wanting to find out doesn't mean he isn't. Sadly if what is being reported about the length of time the shooter has been known to make clear his ideology is true, then other heads need to roll. If it turns out these soldiers were sacrificed on the altar of diversity at any cost then those who ignored this radical need to go to jail also.

LZ, yeah I used the "pencil drawing" feature on my extremely ancient version of Adobe PhotoDeLuxe to touch up a photo of Joe. I'm loathe to learn new software when the old ones work well enough.

how is this at all controversial? lieberman wants to investigate a guy who killed a bunch of people.

Because he's doing it simply for a political agenda. Funny how when thousands were killed by the abysmal response to Katrina, Lieberman promised to launch an investigation.

Regardless of his motivation and failure on Katrina, the investigation needs to get done. Especially given the fact that this guy has been spouting his Jihadist viewpoints for at least seven years and likely has held them even longer yet nobody addressed them. Why? American soldiers have been killed by an enemy in their midst, we owe them nothing less than to find out the truth and if there are other powder kegs in the ranks. If Lieberman is the catlyst regardless of motivation to find the truth, so be it.

Don't doubt for a minute that I want this thing investigated. I just don't want to see Lieberman tie up the Senate with a "show" investigation for political gain. There's already plenty of federal authorities involved; they're the, you know, experts at this sort of thing.

I seriously doubt Lieberman will be useful in any way at all; unless grandstanding and pontificating for the C-SPAN cameras are considered useful these days.

so youre basically trashing lieberman for what you think he will do, not what hes actually done so far (and since you want it investigated, it looks like youre on the same page with the senator)