More on the gathering 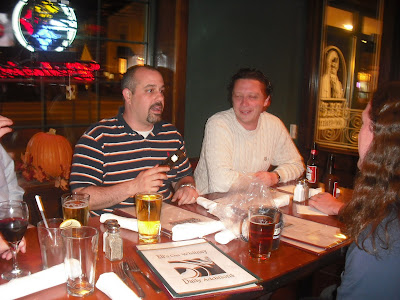 This was definitely a first in the local blogosphere; a gathering of bloggers with hugely divergent political views. But much like Connecticut Local Politics itself, we managed to share a space without imploding in a spectacularly brilliant flash.

Despite our obvious ideological differences, we all enjoyed the social aspect of the evening. The political talk was generally very muted and respectful, much to my relief! It's obvious we all want the same thing (better government) but we simply have different ways of getting there.

Tim White and Gabe Rosenberg were there just as I arrived, me being a little breathless at rushing in from late work. Heath arrived soon after. Jon Kantrowitz and the notoriously camera-shy Anderson Scooper showed up. Don Pesci arrived with his wife. ACR got there a bit later with his bemused son in tow. And of course, Chris was there. 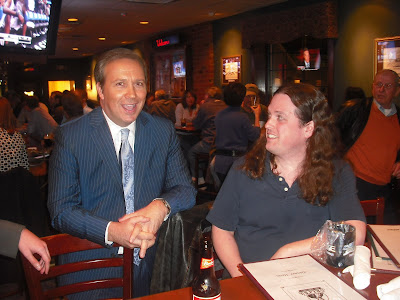 (Dennis House with Chris)
There were a number of surprises, too. Dennis House from WFSB stopped by to wish Chris well, and he gave him a mug. Dan Malloy dropped in and chatted with us for a while. Raj (I think; I'm terrible at getting names right), a new staffer for Rob Simmons joined the festivities. While there was a lot of political talk, everyone agreed that it was an "off the record" evening, where we could just kick back and enjoy ourselves. 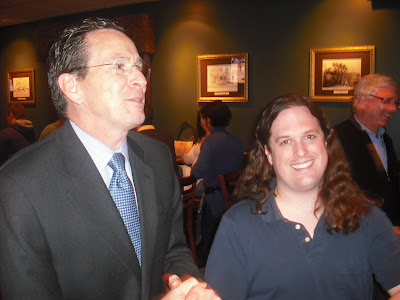 (Dan Malloy)
I have to mention the restaurant, Eli's in Hamden, as providing us with terrific service and accommodating us pretty much on zero notice. On their specials menu they had a Wasabi Encrusted Scallops appetizer, and it was out of this world good! I wish I'd taken a picture of it.

Tim White's video from last night (thanks Tim). As you can see, I'm a complete natural on camera and don't sound anything like a stilted tongue-tied buffoon at all!
(/sarcasm off) 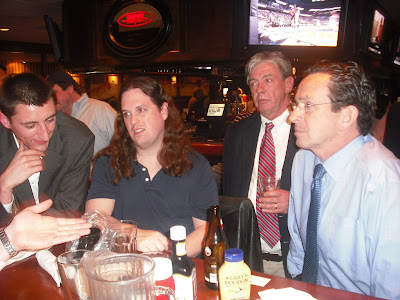 (L-R: Heath, Chris, ACR, Dan Malloy)
Who ever thought they'd see a photo like this? Again, everyone got along so well I was sort of stunned. After meeting many of the conservative members of CTLP last night, it's going to be much more difficult for me to be mean to them because they are really just nice people. Talk about taking the fun out of blogging! 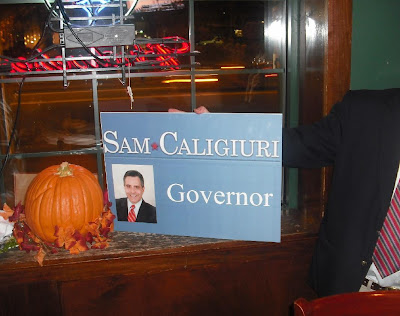 The one bit of overt politicking during the evening was this sign that someone brought along. I'm not entirely sure if they were being ironic or not. Read the wording on the sign carefully to catch my drift.

It was a fun evening and it went off more smoothly than I'd imagined it could. I want to thank everyone for being there for Chris and for pitching in (especially so I didn't get stuck with the check!)
Posted by CT Bob at 11/19/2009 08:34:00 AM

Bob!
Out to ruin my image?

There I am without the trademark cigarette; what's even worse is it's not clear that's coffee in my left hand.
(They have good coffee there!)

Actually I never even looked; I just emailed a couple of things to my sign guy and zipped over and picked a couple up.

In fact Sam Caligiuri would make a superb Republican candidate for Governor for the following reasons.

Complete FIC support (A larger group than most realize)
The *entire* city of Waterbury not just part of it as in the 5th and Sam should be able to take it by 60% or more. Waterbury is alone among CT cities as they will support their own regardless of party.
Italian voting block (not what it was 2 decades ago, but still a factor)

Additional GOP leaning turnout in Waterbury and surrounding towns can't help but to aid in our capturing an additional house or senate seat plus gives Bernier (who will take the 5th on his own) a cushion.

Keeps Sam from finding himself in the ring with Bernier, a combat hardened Navy Intel guy that is seriously and mistakenly under-estimated in some quarters.

Sorry I wasn't able to make it - things are still a bit in flux from my recent move to Stamford. But it sounds like everyone had a great time! Maybe folks would be willing to hold another CTLP happy hour at some point.

ACR yeah, you always have to watch where I am with a camera!

Adam, I think we might be able to put together something along those lines, maybe after the holidays.

And if you don't mind a bunch of Democrats, we do tend to get together on occasion, and I'm sure you'd be welcome to join us (unless it's one of those Lee Whitnum-style "wine-and-dine" deals that only us liberal bloggers are privy to from the political bigwigs! LOL)

I hope that he still has plans to remain active as a commentator on politics. I would not be surprised to find that a newspaper picks him up as an occasional op ed writer covering Connecticut politics.

You think that Chris is a conservative? I think he's slightly left-leaning moderate, myself.

I hope you can make the next one. I think there will be a next one at some point. Maybe a "Welcome Back, Genghis" party?