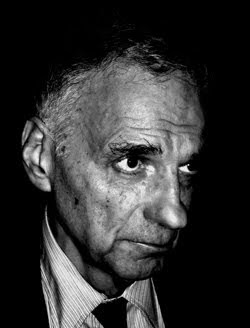 In an AP story about a possible run for Senate here in Connecticut, consumer advocate Ralph Nader said that:

"...he is 'absorbing' the reaction he's receiving about a possible bid for the U.S. Senate, saying he wants to first gauge the level of grassroots support before making a decision."

You want a reaction, Ralph? Well, here it is:

"Just shut the fuck up and go away!"

I used to be a huge fan of yours, Ralph. You've done a lot of amazing things for consumer safety and helped pioneer corporate oversight. For many years you were a true hero to the American people. I'm sure I speak for many when I thank you for your public service.

But you've changed, Ralph. You've become the sort of politician who appears to be in it just for his own ego. Hey, I know it's fun to talk into a microphone and have everyone in the room hang on to your every single word. I'm sure it was a huge ego boost to realize that your candidacy directly affected the outcome of the 2000 presidential election.

Congratulations. You did that, Ralph! You helped get us stuck with the toxic policies of George W. Bush for eight fucking years. While there were many other reasons the Democrats "lost" in 2000, you certainly played a significant role in that outcome. Well done, Ralphie.

But now it's time to get off that podium and just STFU. Go ahead and sell your stupid books, lecture at colleges, and make the occasional appearance on MSNBC or even Fox News if that's what floats your boat. But just stay out of the 2010 race.

You're kind of a dupe if you allow people to talk you into running under the Green Party. You know you'll get some cash, mostly from wealthy GOP supporters who have the clarity of vision to know that you'll receive most of your votes from the Democrats. For them, it's money well-spent. An investment, if you will, in winning a seat for their Republican candidate.

If putting a Republican in the Senate is your ultimate goal here, then you'll run. I can't stop you from doing that. But if you think for a nanosecond that you have even a fleeting chance of winning this thing; that you won't be anything but a spoiler for the Democrats, you've completely lost your mind! We're going into an election where every vote will count, and we likely won't be able to afford you your vanity run this time around.

I hate to have to be the one to break it to you, Ralph. Because as I said, I used to have nothing but respect for you. That is, before you turned into a vapid caricature of yourself, with a heaping dose of Liebermanesque ego and the political myopia of Neville Chamberlain.

You said "I'm just absorbing a lot of the feedback before I make a decision..."

Well, kindly absorb this little nugget of feedback, Ralph; from me to you:

DNC and RNC are both corrupt to the core.

I don't think he has a chance either, which is a real shame. I believe he's a man that can't be bought, and I think that, for a politician, ego goes with the territory (and a huge sex drive, heh heh).

Had Ralph ever won a significant office, we would have seen a lot of fireworks as he tried to break through the status quo to make a better life for us, and then before too long there would sadly be another retelling of the lone assassin story...

He has a right to run for office and if he believes the dems are no better than the reps, so be it. I actually think that the votes he would receive would come from people who most likely have sat out the election anyway. The above 2 comments reflect that mindset. He really is nothing more than a relic of a gone bye activist era. Criticizing but not offering solutions grounded in reality. If you ever read his economic views or the Green party itself, most people would be unemployed under their philosophies. He should have stuck with consumer protection.

I'm not disputing his right to run for office.

All I'm saying is that these days he seems to run solely for ego gratification rather than out of any realistic chance of winning; and I don't understand how someone who is as publicly "anti-corporate getting away with everything" as Nader would rather see ANY Republican occupy that seat.

It appears you underestimate how corporate-friendly your beloved Dems are. To people on the left who have abandoned the Democrats (and I count myself as one), the difference between both parties is minimal. And that's not just a rhetorical strategy, I'm not an independent for the sake of being an independent. When we say that Democrats and Republicans are becoming increasingly similar, we really mean it. The fact is that Chris Dodd has not shown serious opposition to the war in Afghanistan, should be held accountable for his failure on the Finance Committee, and is just as corrupt as ANY Republican could be. It's not just a Republican problem. American politics need to be changed. I wouldn't be satisfied having Dodd and a Republican on the ballot. This is a democracy, although it is threatened every day by the two party system--so no Ralph Nader should not "STFU". Also don't think Nader would "rather see any Republican occupy that seat". That implies he's actively working for the Republicans. Don't be silly. As a Green, I know a thing or two about Democrats infiltrating parties.

Does this mean you won't be attending the Nader fund raiser?

I don't know if I could survive being in the same room with that many Republicans!

Wow, that's a lot of venom directed toward Ralph. I just don't get it. For me he's still a real hero, sort of my era's version of Eugene Debs.
.

I've said several times how much I admire what Nader's accomplished in his role as a consumer advocate. He IS a hero for doing all that.

But his role as a political spoiler and unrestrained egomaniac is hard to embrace. That's my opinion. Regardless of Chris Dodd's somewhat variable history with regard to regulation, Nader will do much harm to the cause of consumer protection if he inadvertently helps a corporate-loving Republican get into the Senate.

Meanwhile Dodd did nothing but collect checks from the banking and insurance industry until it looked like he might lose an election.

obama wasnt expected to win early on. maybe he should have dropped out when polling numbers were low.

Bob, I could not agree with you more. Ralph's ego helped give us 8 years of Bush. For that I have no use for him. He has zero chance of winning, zero! He would be a spoiler and help hand the seat to a Republican. We've seen how the Republicans are interested in advancing the country.
Ralph, STFU and go away!

first off if Gore had won his OWN HOME state in 2000.. like Clinton and he did twice before..

third.. over 1,000 people of FACEBOOK want him to run as Green


maybe the banking lobby has got to you ??

Rather than damning Nader, the Democratic Party - and Progressives in particular - should be reaching out to Nader, rather than treating him like a pariah.

Food for thought : Is the Democratic Party's disdain for Ralph Nader the equivalent of Joe Lieberman's disdain for Connecticut and America ?

I rather respect Nader in one regard.

Think about it, he's right where we left him; same causes, same stances, same guy.
Unlike the worst example I can think of, Lowell Weicker, Nader's never checked a poll prior to speaking in his whole life.

Make no mistake here; I don't like Nader at all and can't imagine agreeing with him on anything.

He is however more consistent than the vast majority of political figures of our time.
Few can match his level of obstinance.