A lukewarm endorsement for Richetelli

The Connecticut Post issued it's endorsement of local candidates on Sunday, and their total lack of enthusiasm for Jim Richetelli is very telling.

Rather than publish a well-thought and researched endorsement of a candidate, like the one the New Haven Register gave to Genevieve Salvatore, the Post simply listed their endorsements en mass, with no reason or explanation.

I wonder if they simply flipped a coin and went on to other issues?

That's it. The entire endorsement!

Always willing to take tiny lemons and barely squeeze out enough juice to make lemon-scented water, the mayor's campaign wasted no time in trumpeting the rather lame endorsement. See for yourself: 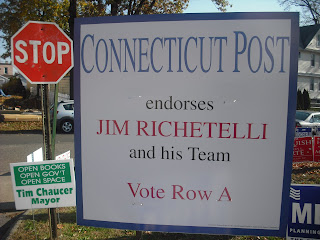 Note how the sign displays way more words than the actual online endorsement itself!

UPDATE: The size of the sign is roughly four times the normal size of a political sign, and according to field reports, it isn't allowed under current rules. Perhaps the Republican candidate for City Clerk Linda Stock can look into this possible violation of campaign rules.
Posted by CT Bob at 11/03/2009 10:00:00 AM