Joe Lieberman to vote for cloture? 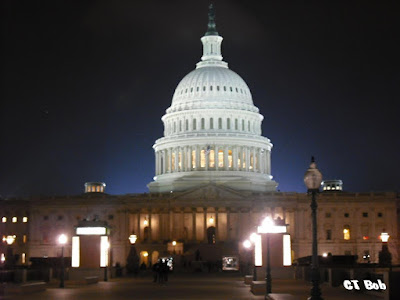 Tonight the fireworks begin at the Capitol. But the cards are firmly stacked against the Democrats in the upcoming Senate vote on health care reform.

Christine Stuart at CTNJ has a good report on the likely vote:

“Senator Lieberman will likely vote for cloture, so that the bill will be debated,” a spokesman from Lieberman’s office wrote in an email Friday evening.

Big whoop. Here's how I see it going down:

Tonight is the likely cloture vote. Joe Lieberman will vote for cloture because he already knows that it will be defeated by the uniform Republican block plus at least one conniving Democrat. Joe probably already knows this because senators talk, so he may vote in favor of cloture with complete confidence that the measure will fail. Joe Lieberman will then go on Fox News, shedding crocodile tears at the sad conclusion that America just isn't ready for health care reform.

Or, Plan B (Joe's favorite!) has cloture succeeding, giving those Democrats who are against reform some cover; but when it comes up for the final, official vote that matters, we still have the 40 GOPers, who generally hate people anyway, voting against the bill, and enough red-state Dems (and Joe, of course) tagging along to defeat the bill.

The only way Joe votes for cloture is because he knows it will die in the subsequent vote. I just don't see this thing surviving the Senate, but we'll get to hear a lot of bluster from the politicians and we'll see some dramatic television on C-SPAN.

The end result will be a failure for the long overdue reform effort, and history will portray this as a Democratic defeat remarkably similar to 1994.

And the heartless insurance companies will continue to rake in billions in profits by letting people who should be under their care die from treatable illnesses.

That's how I see it going down. I'm not very optimistic about anything good happening despite the strong efforts of Connecticut's Congressmen/woman and Sen. Dodd.

And of course, all our legislators (even those who voted against the bill) will continue to enjoy the very best health care in the world. God bless America!
Posted by CT Bob at 11/21/2009 10:28:00 AM

Yes, all Republicans "generally hate people". Their objection has nothing to do with spending money we don't have, bankrupting our children, or creating new bureaucracies that will doubtlessly lead to ugly unintended consequences. It's all about HATE.

That's the difference between you and me. You think I am evil. I think you have good intentions, but are horribly misguided and will wind up doing much more harm than good.

You're absolutely correct Ryan, and please continue to take every single word I write here 100% literally, because I NEVER use irony or humor or exaggeration to make a point in my column, you silly goose.

I'm clutching my assault riffle to my chest and praying to jesus that you are correct on this financial abomination ultimately failing in the senate...

Praise the lord and pass the ammo, brother!

What's an "assault riffle", anyway? I like a salt on my Ruffles, but that's a bit different.

North of the Border Dem said...

Don't need 60 to pass it, just needed 60 to move it -- I say it passes, barely passes, but passes after the T-day break.

You're right. I'm learning as I go. But we just got 60 tonight, so it'll be moving forward from here.

Bob, do you follow David Waldman at 'Congress Matters'? He is very good at explaining Congressional process and procedures. He does step by step, blow by blow, coverage.
In tonight's post, he links to 'OpenCongress.org'. The stuff there is useful too.
oldswede

Oops, the link to DW.
It's what you would expect, www.congressmatters.com

To be completely honest, I'm ridiculously lost when it comes to Senate procedural stuff. congressmatters.com seems like a good place to start. I'll be sure to put it in my skimming rotation (because, I'm too busy to actually read everything that interests me...yup, I'm a speed-skimmer!)

Speed skimmer? Isn't that one of those annoying personal watercraft that buzz the beach?
oldswede

senate procedure is absolutely ridiculous. hats off to anyone who can learn and memorize it.

Yeah. I always feel like I'm playing catch up with the various intricacies of the Senate.

I'm not sure why Americans are so afraid of government run health care. Don't you know anything about the other countries' (Canada, UK, France etc) health care systems? Nobody goes bankrupt because of one major illness, nobody has to keep working to maintain their health care coverage even though they have cancer.