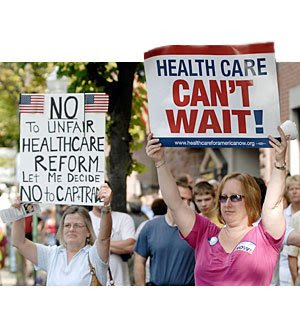 Late last night in a rare Saturday session the House of Representatives passed the latest version of the health care reform bill by a vote of 220-215. 39 Democrats broke ranks and joined the opposition (primaries, anyone?) and a single Republican voted in favor of the measure, Rep. Joseph Cao of Louisiana (bravo!) likely ensuring a shit fit from Minority Leader John Boehner.

The bill included the Stupak amendment, which strips all funding for abortions from the measure. Scarecrow from FireDogLakes explains while there are many good things included, there is disappointment about Stupak:

It’s like winning a huge battle, but half of your friends were killed or wounded.

36 million more people will be insured or become eligible for Medicaid
There will be a trillion dollars raised to help subsidize this.
There will be multiple measures to help control the costs of Medicare
We will stop subsidizing private insurers in Medicare Advantage
Closes the donut hole
Allows Medicare negotiation for drugs
Includes the seeds of a public option
Prohibits denials based on prior conditions; ends rescissions except for fraud
funds more education for doctors/nurses
Begins dozens of health prevention programs, pilots, surveys
Creates entities to evaluate and recommend better treatment, cost saving
And on and on.

There is some hope that after the Senate passes their version and the bill goes into reconciliation, the amendment will be modified or dropped. Some say the Stupak amendment is a way for reps to save face with their constituents, especially in the red or pink states, and then after it gets modified they can say they tried to legislate abortion funding out of the bill.

But this sort of maneuver is fraught with danger, in that we still have 39 Dems who voted against the bill even WITH Stupak included, and we gained only a SINGLE Republican. Who knows what will happen when the combined bill is sent back to committee?
Posted by CT Bob at 11/08/2009 06:40:00 AM

Thanks to my great congress man Jim Himes who led the way!!!!

If this had been done a week ago, would we have seen somewhat different election results? More motivated Obama voters, perhaps?
Is this a reason why there was so much stalling by the party of no?
oldswede

One trillion raised correction a tax increase of one trillion

Oldswede, that's a good point. There might be something to it.

Yeah, in time for the Monday Morning "news"cycle.

Friday afternoon- "the less people know about this the better, but we gotta release this so no one can say we didn't"...

Elli from Toronto. I would just like to congratulate to those in favour of the reform.. but it's just a 1st round, in which it passed by just a few votes. My bet is it won't make it through the Senate unless it's changed even further.

Lakezoarian: I make it a point to catch the late-Friday afternoon news, for just the reason you state!

yeah, inside the Beltway it's commonly referred to as "the Friday night news dump".