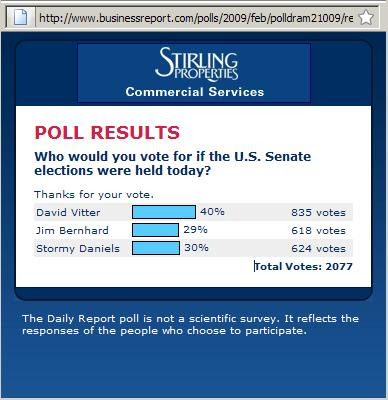 UPDATE: BusinessReport.com, a Baton Rouge-based business news organization, has a poll asked who would Louisiana voters choose for Senate in 2010. The results are quite interesting, even for an internet poll.

A campaign is growing in an attempt to thrust (get it?) adult video star Stormy Daniels into the race to challenge Louisiana Republican Sen. David Vitter in 2010.

Vitter, a conservative member of the GOP, was linked to the DC Madam when his name and number were found in her phone records. The woman later allegedly committed suicide and it's rumored that the scandal may have led to CIA Director Porter Goss's resignation.

Vitter also allegedly visited a New Orleans brothel several times beginning in the mid-1990s, paying $300 per hour for services at the bordello after he met the madam at a fishing rodeo that included prostitutes and other politicians, according to Jeanette Maier, the "Canal Street Madam" whose operation was shut down by a federal investigators in 2001.

(The most disturbing part of that paragraph is that there are such things as "fishing rodeos" in the world!)

In an interview, Ms. Daniels declared her intention to make his contradictory behavior the centerpiece of her campaign.

"Originally the focus wasn't even about making me as a candidate," Daniels said. "I think it was about bringing attention to the Senate race in general and then the response was overwhelmingly positive and, you know, I think everyone is just running with it."

A website called "Draft Stormy" has been created to publicize the candidate's potential run.

So far Stormy hasn't made it clear under which party's banner she'll run. I'm thinking that she should register GOP and force a primary against Vitter. That will have the effect of maximizing the publicity, as opposed to filing as an independent and making a run in the November election, which will likely get lost in the shuffle. I don't know how Louisiana rules work, but here in Connecticut you need to gather 15% of the delegate's votes at the state convention, or a percentage of signatures from party registered voters.

In related news, former NY Governor Eliot Spitzer mused over Vitter's alleged brothel past. "Only $300 an hour?" Spitzer exclaimed, "Yeesh! Those gals must have been some skanked-out hose beasts! You only get real quality when you spend thousands! Let me give that fellow a couple phone numbers."

>>Vitter, a conservative member of the GOP

Honestly Bob; get the story straight.

Well, you guys have been awfully fiscally irresponsible in recent years; Vitter was just ahead of his time! LOL

no, nevermind, please don't answer that

Too late, you asked! LOL!

You can google "diaper vitter" and get tons of links, or for a quick treat click on this Wonkette link.

The "Diapergate" rumor has been circulating ever since it became known that morally-upstanding, extremely married Dave Vitter seems to enjoy the company of young women SO MUCH that he pays them to spend time with him.

Then he poops his Pampers. (allegedly)

Oh, Lord. I read the Wonkette link... I dont know what to say.

Update: DailyKOS has a good diary up about the campaign.

Why not Stormy Daniels? All the rest of them have been wide open to the highest bidder for years now. J.C. Sr.

...it's almost impossible to comment on a story like this without using bad puns! Plus, it's fun!

I'm shocked at your poor grammer!

Everyone knows you can't use "good" and "KOS" in the same sentence.

LOL! Seriously, I just randomly place words in a sentence regardless of their order, and wind up sounding like Yoda about half the time!

But there's nothing funnier than the look on their face when someone like Sean Hannity mentions that website. I really love the way conservatives demonize The Daily Kos. It makes it so much easier for us to effect our progressive agenda if you guys continue to refuse to take us seriously!

Before or after he fills the diaper? (Yeah... Its disgusting but someone had to ask.)

Wonkette has a decent right up but the NOLA Blogs did a great job of covering all of his fetishes and known whereabouts, as well.

The So Called Liberal Media didn't dig much past the fact that he was with prostitutes...

I just wish someone would explain to me how Eliot Spitzer had to resign, yet Diaper Dave continues to make his mess in DC?

Spitzer was chasing down the banks... He had enemies.