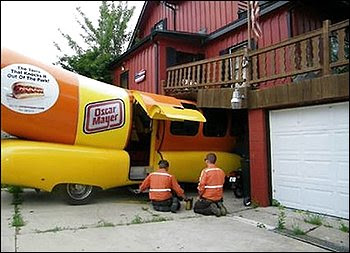 Yet another wienermobile has met an untimely end (and no, I'm not talking about it being dropped into a pot of simmering water).

For the second time in just over a year, the famed Oscar Mayer wienermobile has crashed! In this post from last year I pointed out the dangers of driving a wiener on ice-slicked roads. There's simply no good reason for a wiener to be driven on the highways of our nation! God only knows what would have happened if they were driving a kielbasa!

Hell, even a bratwurst could have completely destroyed the house!

But, apparently, nobody heeded my call for a reform of our extremely lax wiener laws. The wiener above reportedly slammed into a house because the driver didn't know whether it was in drive or reverse! That's because it's a goddamned wiener! Both ends look exactly the same! It's worse than ever for the embattled Wienermobile; some group of whiny NIMBY's want it banned from ever visiting Hawaii again.