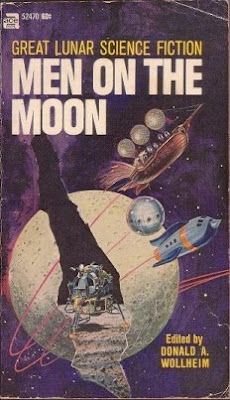 I remember my family taking me to visit my uncle Richard and aunt Dolly back when I was about six or seven years old, and my uncle had an extensive collection of science magazines. I found a 1959 issue of something like Popular Science that had a cover illustration of a spaceman stepping onto the lunar surface, with the title, "Man To Walk On the Moon by the Year 2000". That image helped inspire my fledging interest in space exploration.

A year or two after that issue hit the newsstands in 1959, and while I was still a toddler, President Kennedy upped the timetable by challenging America to get a man there and back before 1970, to beat the Soviets to the moon (a very real fear at the time, illustrated below). Our nation then launched itself into the space race. 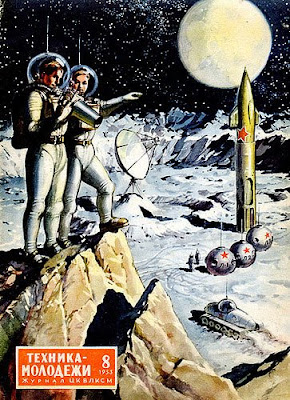 There were obviously some bumps in the road. I remember the day well when the three astronauts died on the launchpad in the tragic Apollo I fire. I remember it because it happened on my eighth birthday, in January 1967. In the dark days that followed it seemed very unlikely that America would be able to meet JFK's ambitious deadline. 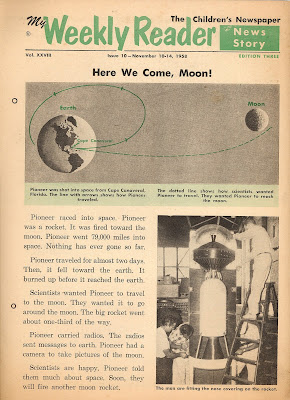 But NASA was up to the task, and we were back in space by October 1968 with the Earth-orbital mission of Apollo 7 (below). I recall being in class some time soon after the successful mission, and reading about the flight in the latest edition of My Weekly Reader. It was always fun to see that rolled up tube of flyers appear on the teacher's desk with her mail, because I loved reading about the latest exploits of the astronauts in language that a fourth-grader could easily understand. 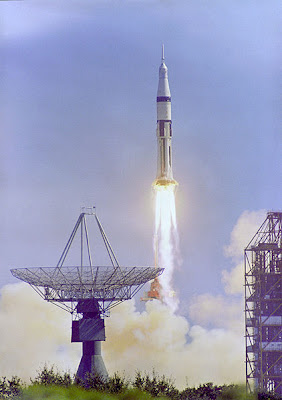 I followed each mission closely, in school and at home watching TV. Walter Cronkite's obvious enthusiasm for the space program and his patient manner made it easy even for a young child to comprehend complex procedures such as rendezvous and docking in space.

Soon it was the summer of 1969. School vacation was in full swing, and fortunately all the kids in my neighborhood had recently survived the July 4th festivities without losing any fingers to cherry bombs or M-80s, which was a very real problem back in those days (I still miss the easy and widespread availability of bottle rockets and Roman candles). The excitement mounted as we approached the launch date for Apollo 11.

Finally, the big day arrived, and after a successful launch and journey to the moon, the astronauts were on the lunar surface.

The day of the landing and moonwalk turned to evening as the whole family gathered in our living room to watch the drama on our black and white TV. The rooftop antenna got pretty good reception, although sometimes during the summer we would get some ghosting from nearby channels. And when a plane flew into the signal it would sometimes fade out to static for a few seconds. 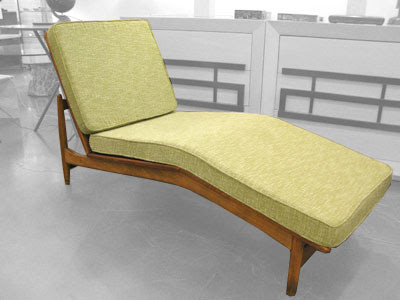 But that night the TV reception was good. Us kids were sprawled on a pair of very weird 60s looking lounges that my parents bought for some reason, while the grown-ups were sitting on the couch. It seemed to take forever for the moonwalk to begin, as there was some kind of delay before they could descend the ladder. I didn't understand what was taking them so long; I figured they should land, pop open the door, and scramble down the ladder!

And where was the video? All I saw were news anchors discussing the goings-on during their preparations, and suddenly the screen jumped and a grainy, fuzzy, very contrasted image appeared. Apparently Buzz or Neil had pulled the release on the video camera door and it started broadcasting video of the recognizable leg of the lunar lander. 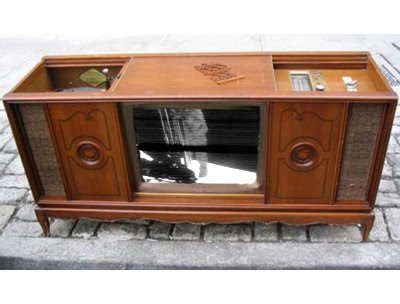 My entire family was riveted as Armstrong descended the ladder. We all knew that we were watching something incredibly momentous, and just as Neil prepared to step onto the lunar surface, my mom called out to Armstrong, "Say something historic!"

A second later, Armstrong recited his famous line. We all laughed, and I looked at my mom in amazement at how she had picked the exact perfect moment to break the tension in the room!

The rest of the moonwalk was a blur. We all chatted about how incredible it was to have live TV from the moon. I vaguely remember Nixon's historic phone call to the astronauts, but soon after I must have fallen asleep (it was very late, with Armstrong stepping on the moon at nearly 11PM, but my parents extended my usual 9 o'clock bedtime). I only remember waking up in bed the next morning and asking how the rest of the moonwalk went.

I recall thinking during the following several days I that I was now living in a different world. We had made it to the moon, and there was even talk of going to Mars by 1980. While the reality turned out to be very different (we were still involved in a terrible war; the Soviets had a nuclear arsenal pointed at us, and we at them) there is no doubt in my mind that the world had indeed changed in some subtle, hard to describe way.

I was awakened that night to watch the live broadcast; after Armstrong took that "one giant leap," I went out to my back porch (it was a full moon that night, or very nearly so) to see if I could see the man ON the moon. Sadly, I could only see the one IN it.

I still own and live in that house.