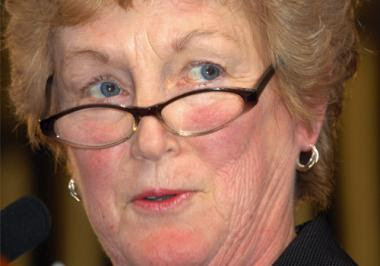 (Kathleen Cei/New Haven Advocate photo)
After six months of stalling and waffling, Jodi Rell has finally admitted that in order to balance her budget she will have to raise some taxes.

The history of this year's budget battle has been interesting. When Gov. Rell first introduced her own budget, she wasn't even very sure of whether it contained a six billion or an eight billion dollar shortfall. It seems that someone with so loose a grip on her own numbers right from the get-go is probably going to have a tough time coping with the rest of the budgetary process.

Finally, after six months of painful program and service cuts, made while promising not to raise taxes, Gov. Rell has taken an abrupt U-turn and decided that raising taxes is a good and necessary idea.

The take over on My Left Nutmeg is that this displays a stunning lack of leadership by Rell, and Mayor Dan Malloy, who is exploring a run for governor, has a quote in the article:

The day the Governor presented her budget, I said it was out of balance. She said it was balanced, despite knowing it wasn't, for one reason only: to maintain the illusion that she could somehow balance the budget without looking at the revenue side of the equation. Today, 174 days later, she's finally willing to acknowledge that revenue has to be part of the solution. But look at what's happened. We've wasted taxpayer dollars -- $10,000 a day. Important programs - life-altering programs - are now being handpicked for survival by the Governor as she governs by executive order. None of this was necessary. All of it was avoidable. And we still don't have a budget.

Had the Governor done her job in February - which was to propose a balance budget - all of this could've been avoided.

What a waste of time, money, and effort. What a shame.

As of late yesterday the only tax that Rell publicly stated she would support is a 75 cent increase in the cigarette tax, but it's expected that when the latest version of her budget appears today as required, it will contain some kind of income-based increase.

Democrats have proposed raising the $2 tax on packs of cigarettes to $2.75 to raise $196 million over the biennium. Rell confirmed that the higher cigarette tax is in the mix. "That's one tax," she said. "No one wants taxes, but that's part of it..."

Cigarettes again. When I was a kid, a pack would go for a quarter. Then the government discovered that they could put big taxes on cigs and people would continue to buy.
This was a good policy for a long while because it could discourage smoking. It would also beef up the state and federal revenues with "sin taxes" collected on stuff that good, upright citizens should not be doing. The problem of addiction was brushed aside.
We know now that the tobacco companies were using all the tools of modern psychological motivation to get people addicted, especially teenagers (or younger). The price for a cigarette is now so high that everyone I know who has been able to has quit. Who's left? Mostly those with an incurable addiction. Some people are simply more susceptible to physical dependencies than others. These addicts are victims of cold-blooded pushers, just as heroin or crack addicts and the price keeps going up.
I believe we are past the point were there is any social justification for penalizing those still addicted. Our politicians are no better than the pusher on the corner who tells the addict that the price just went up for the desperately needed fix.
oldswede

What do you make of the Governor's spin that she said (which I believe she did) she would only explore taxes after all possible cuts were made?