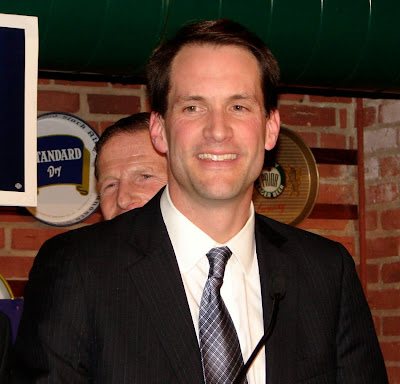 Late yesterday "The Briefing Room" (one of the blogs of "The Hill", which reports on Congress) confirmed the fund raising numbers with the Himes campaign that I posted yesterday.

From The Briefing Room:

First term Democratic Rep. Jim Himes (Conn.) raised $520,000 in the second quarter and has hauled in over $1 million since Election Day last year, according to a Democratic source familiar with his fundraising.

UPDATE: We have confirmed Himes' fundraising with his campaign team. We also found out that Himes is not in debt. Rather, $35,000 of the $365,000 (CTBob: the blog originally said it was current debt) was debt Himes paid off in the second quarter. The remaining $330,000 are loans Himes made to the campaign last year and has transferred to his 2010 campaign.

The supposed Republican challenger to Jim's seat may be John McKinney, the minority leader in the senate.

However, McKinney hasn't made an official announcement to run yet, and judging by the recent frenzied fund raising by hopeful GOP challengers to Sen. Chris Dodd, there may not be a whole hell of a lot of Republican dollars even left in the 4th District to mount a viable challenge to Himes at this point. Unless McKinney comes out of the blocks with some astounding numbers (if and when he does announce) he will have a long and difficult road ahead of him.
Posted by CT Bob at 7/09/2009 06:40:00 AM