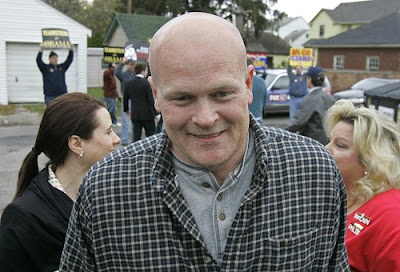 I don't know about you, but I was sick of the guy they're calling "Joe the Plumber" about five minutes after he was introduced by the Republicans. "Joe" is being paraded around the country by the McCain campaign as if he's a national hero, even after he's been shown to be a total fraud who doesn't hold a plumbing license, who isn't making over $250,000 (which is the justification that he used to complain about Obama's tax plan, he's only HOPING to buy a business while making around $40K), and most of all, his first name isn't even "Joe"!

Fake plumber Samuel Wurzelbacher is getting out of control now. The GOP has programmed him like a Commodore 64 to repeat McCain talking points, and even come up with some outrageous claims, such as a Barack Obama presidency would mean the "death of Israel" and end democracy in America. This is a guy they're seriously talking about running for Congress in two years.

In the space of about a week, Joe the Plumber has been transformed from an anonymous plumber's helper (BTW, this isn't a pun), to a national hero of the "everyman", to a frothing ultra-conservative wingnut. It would be funny if it wasn't so obviously a symptom of a complete breakdown of the GOP's values. They are a party in deep trouble.

"Just a coincidence?" he asked. "We report you decide."

Later Tuesday afternoon, Shepard Smith pressed Wurzelbacher on his comments, reminding the woefully misinformed McCain backer that Obama has consistently voiced support for Israel. Pressed several times to explain how he could agree with the conclusion that Obama would lead to the death of the Jewish state, Wurzelbacher was unable to come up with any good reasons aside from Obama's position in favor of negotiating with rogue regimes such as Iran.

"You don't want my opinion on foreign policy," Wurzelbacher said. "I know just enough to kind of be dangerous."

Smith seemed to agree with that assessment, implying that the only source for Wurzelbacher and the supporter's concern was "hateful things spread on the Internet." The host clearly worried that Wurzelbacher's endorsement of such a view might inspire violence against the candidate.

Why, Smith asked, would Wurzelbacher believe Obama was lying when he spoke of the importance of Israel's relationship with the United States.

Wurzelbacher was flummoxed. All he could offer was an appeal for people to "go out and find their own reasons ... go out and get informed."

"Joe's" time in the spotlight is finally almost over. Sadly for Joe, he willingly allowed himself to be used by the GOP like an old dish towel, and he spent the total of his fifteen minutes of fame as a mindless tool of the Republicans. He's already a dismal punchline for the McCain campaign and the GOP.

If the LA Times would release the video of Obama speaking at the farewell dinner for the PLO propoganda chief, then we all would get a clearer picture of Obama's views on Israel. I would suspect they are similar to many on the left who try to justify Palestinian suicide bombings of civilians. I would also suppose that Obama believes in moral equivilency when Israel defends itself and Palestinians are killed usually when the coward ass terrorists hide in civilian areas. While I agree Joe is a joke, his fears may be grounded in actual facts. The LA times acknowledges the existance of the tape but offers no rational reasons to not release it.

Your alleged "many on the left who try to justify Palestinian suicide bombings of civilians" are no different from those on the right who scream "Bomb Iran", with the exception that we're not running any of them for President! Your implication is that Obama condones that sort of talk. He doesn't.

Back in the 1990s, when JMcC was chairman of the International Republican Institute, he sent hundreds of thousands of dollars to Khalidi's Palestinian research center. Khalidi is a legitimate academic and recognized as such by McC until old St. John started diving head first into dry wells daily out of a panic-driven desperation to save his ambitions.
olsdwede

I'm hoping that the only "Joe" we'll see running for veep on the GOP ticket will be Lieberman. It would be lovely to have ol' Joe to kick around once again!

I hate to disparage plumbers in general, but have you ever smelled that PVC cement they use? It's hallucinogenic. Causes brain damage.
McC's JtheP may have spent too much time under the sink with the glue cap off.
oldswede