Obama going to the mats with McCain 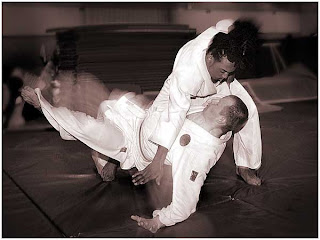 I'm very happy to finally see that a Democratic presidential campaign has learned to be proactive, rather than reactive, when it comes to countering attacks from the other side.

This coming week Barack Obama's campaign will release ads that point out how John McCain is "erratic in a crisis". This is a brilliant strategy to combat the anticipated slander crusade by McCain, which has already started if Sarah Palin's recent remarks are to be any indication.

We'll see them dredge up statements by Rev. Wright and Bill Ayers and try to make them appear as if Obama supports them and indeed, agrees with them 100%. McCain will try anything to distract the voters from the awful mess eight years of Bush and GOP leadership has given us.

The "political jujitsu" strategy of the Obama campaign is described in this article by Mysticlaker on DailyKos:

These techniques were developed around the principle of using an attacker's energy against him, rather than directly opposing it, and came to be known as jujutsu

Branding his opponent as "erratic in a crisis," Sen. Barack Obama (D-Ill.) is preempting plans by Sen. John McCain (R-Ariz.) to portray him as having sinister connections to controversial Chicagoans.

Obama officials call it political jujitsu – turning the attacks back on the attacker.

I think it will have a tremendous effect of the electorate to consider how McCain's actions, including his panicked suspension of his campaign to rush to DC and do absolutely NOTHING HELPFUL in regard to the recent economic crisis, are often ill-conceived and reactionary. This is a key point to make clear to the voters, and Obama's people are getting it right.
Posted by CT Bob at 10/05/2008 09:23:00 AM

Geez, Bob. Do you ever sleep? I just got around to you this morning so I'm going to comment here what should be on your last post which is old news already. McCain wants to get down and dirty and the best way to do that is to let your guurl do the dirty work. He already knows how to do that. His billionaire Cindy buys him new houses and Hondas faster than he can keep track of.
But that is only how low I feel towards this guy. John McCain once said that any American who wants to get out of Iraq is a coward. (not in those exact words). That was directed exactly towards me. Although I was drafted in the Army and served honorably during the Korean War, I hate all wars. Especially this latest Iraqi freedom farce. All McCain does is call up his POW status. That was hell as is any physical or mental wounds suffered from combat by so many brave men and women. Thank God I never experienced it but I had an older Airman brother who died in combat in WWII and knowing my big brother who was actually just a kid (19) at the time I would like to think that if he survived the crash he came out with guns blazing instead of waving the white flag(McCain's line). Thanks for letting me vent. J.C., Sr.

I'll have plenty of time to sleep after Nov. 4th! In the meantime, I'm trying to keep up with everything.

Vent away all you want here; that's one of the reasons blogging is so much fun, I get to hear what other people have to say.

The Hannity Sunday night propaganda hour just finished a very detailed piece that attempts to connect Obama to Ayers particularly, and to the PLO. It finishes with a bit on ACORN.

Now Fox is running for at least the third time that I am aware of another highly produced "documentary" blaming FDR, the Democrats who advocated credit being extended to people in poorer neighborhoods, and once again, ACORN, for the current credit crises.

It would be a community service if you could start capturing this stuff so we can segment it to embed it in posts.

They've clearly been putting this together for some time.