The image below is from yesterday's front page of dumpchrisdodd.com, one of a handful of local websites that popped up this year as a result of the GOP's hysterically incessant corporate-sponsored "grassroots" campaigning.

Now that Sen. Chris Dodd has announced his retirement after a career of outstanding public service, thereby taking all the wind out of the "dumper's" sails, it'll be interesting to see what happens to those rabid extremists who believe the cause of all their problems has been solely because of our senior senator.

My guess is that they'll completely lose focus and splinter off, eventually attacking each other as individuals pledge support for whichever of the multiple dubious candidates in the scrum to be named GOP nominee for Senate.

It appears that the dumpers have already lost all direction, and for their next target have decided to attack a weather and scientific research center high up in the mountains of New Hampshire. 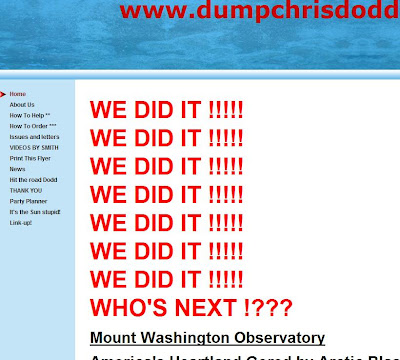 If karma works the way it should, the dumpers will have just gone deeply into debt by ordering a metric shitload of non-refundable "Dump Dodd" signs and bumper stickers.

The vast majority of these folks are nice people that have never been politically active in their lives and have no idea as to decorum etc. and thus *some* wind up behaving as badly as CTKeith.

Knitting them together into some sort of useful coalition is akin to herding cats, yet a few brave souls have set out to do just that.

The problem is they don't comprehend compromise and often fail to look long and hard at the unlikely coalition the Democrats not only put together and kept from killing each other, but kept together long enough to mop the floor with the GOP from coast to coast.

IE: Simmons is pro-choice thus he must be a "RINO"
Never mind that both other GOP candidates are as well.

The situation with these new folks is best analogously illustrated here:

BRIAN: Are you the Judean People's Front?

BRIAN: I didn't want to sell this stuff. It's only a job. I hate the Romans as much as anybody.

JUDITH: Are you sure?

BRIAN: Oh, dead sure. I hate the Romans already.

REG: Listen. If you really wanted to join the P.F.J., you'd have to really hate the Romans.

REG: Right. You're in. Listen. The only people we hate more than the Romans are the fucking Judean People's Front.

LORETTA: And the People's Front of Judea.

LORETTA: Oh. I thought we were the Popular Front.

FRANCIS: Whatever happened to the Popular Front, Reg?

REG: He's over there.

Is is pure stupidity on behalf of you Bobby Boy, or are you trying to make a "funny"?. Anyone with even a half of brain would know what they mean.
It looks like you're a little upset over the corrupt loser dropping out. Good.
I'm guessing that you have a thing for "teabagging". Whatever floats your boat.

Yes, I know exactly what they meant.

They absolutely hate the Mount Washington Observatory and they want to see it destroyed! Sheesh, it's obvious!

Perhaps, even now, under the cover of darkness, an elite team of teabagger commandos are stealthly making their way up the steep flanks of the Rockpile, straining under the weight of their load of repugnican toxic slimeballs. Once the Observatory has been dealt with and it's staff forever silenced (damn treehuggers), they will move on to their main objective: the WHOM antenna! (http://www.whom949.com/) Death to light rock! Soon all of northern New England will come under the spell of their teabagger propaganda... Oh, how their ranks will swell when the dairy farmers are finally able to hear The Word! Blasting the Old Man's face (damn librul moran) off Cannon back in '03 was just a rehearsal to this glorious mission!

And I do agree that "light rock" needs to die a swift yet painful death. Imagine...a world free from the evil clutches of Dave Mathews!

The Republican party has become a church that would rather chase away heretics than welcome converts and that's no way to become a majority party.

>>The Republican party has become a church that would rather chase away heretics than welcome converts..

Silliest thing I've seen in a while.

The GOP applies far less acid-tests than do the Democrats.

Choice?
We'll run you either way, just let us know which side your on so we can position your candidacy correctly.

Legalize Drugs?
We have both "lock `em all up" and "let's decriminalize everything" over here. Once again, we need to know where in the spectrum the candidate sits for positioning purposes.

The only area where the GOP tends to close ranks is on Constitutional issues, most especially those regarding the 2nd; yet we do have a few (mostly big city mayors) that have no problem with gun control.


We picked up a nice 25 year old fellow and put him on the Town Committee just last night. He had been a fairly active Democrat, but was tired of being treated poorly by them due to his pro-life stance.

It seems there's increasingly less room in the Democratic Party for those in the pro-life camp.